L.A. is jam-packed with fantastic actors, but our theater scene is overshadowed by the entertainment dominance of film and television (sometimes literally, like by the giant FYC billboards that tower over every major intersection in the city...there are definitely theaters under some of those billboards!). I have learned over the past few years, however, that there is a wealth of excellent and creative theater happening across this sprawling metropolis. And, five years into my residence here, I am thrilled to say that I am a part of that happening!

At Los Angeles's storied Andaz Hotel on September 27th, 28th, and 29th, at 7:00pm and 9:00pm, my two-person play, A MERE CONCEPTION will be performed by the blisteringly talented people at InHouse Theatre Company. InHouse specializes in site-specific productions, and A MERE CONCEPTION is set in a Las Vegas hotel room. Short of driving to Vegas, what could be more appropriate than putting on the show in a hotel on the Sunset Strip?

Due to the intimate nature of this setting, tickets are extremely limited. They can be procured here, by clicking on the image below, or via InHouseTheatre.com

See you at the theater hotel room! 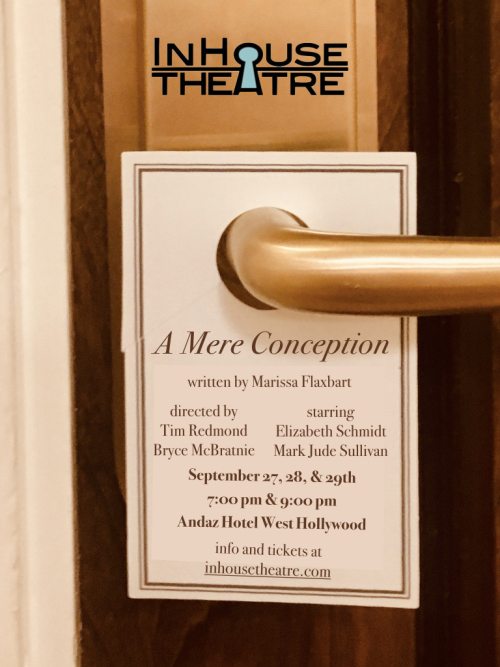 My years-hibernating documentary project has finally come out to feast, and it is really hungry! Excitingly enough, it was approved for Kickstarter.com, where you can now go and donate to help me finish, promote, premiere, and festivalize this very very cool, pro-school-music doc, which focuses on the showchoir at my alma mater, Chesterton High school.

Please check it out, and help make it an (even realer) reality if you can! Thanks.

Damnation of Faust Review on BC; Premiere Chicago Production

Every so often, I write a review or commentary for Blogcritics. Yesterday, I slaved away on a review of the opera I'd just seen at Lyric here in Chicago, the Berlioz work Damnation of Faust. I was so proud of it. It was lovely. But what to do with it? It was definitely aimed at people interested in opera. It needed an appropriate home.

Thank goodness for BC. It's housed several of my theater reviews, as has the Chicago section of GalsGuide. I'm not sure how many people go there specifically to read the Culture section, but I have a feeling that people do. One of those people could be you. Hope you like it!

Tom Stoppard's Rock 'n' Roll and some thoughts on diligence

Yesterday, I was compelled to post on the possibility of committing to write something here everyday. But the sentiment wasn't fueled by a stray spark of inspiration; it was fueled by a pretty dopey move on my part. In an effort to get some things squared away at last, I diligently devoted some private time to writing a review of this tremendous play I saw a couple weeks ago. I'd been letting my thoughts stew long enough; it was time to let them out.

After finishing my review (below), I moved to post it online, but not before checking the theatre's website to see when the play's run would end. And I found the date in question: June 7. Yesterday.

If I'd actually been diligent about devoting private time to writing, this review would have been written at least a week ago. Sure, that wouldn't have allowed for much stewing, but at least the review would have had a chance to encourage some readers on the subject of whether or not to see the show.
At any rate, I'm still proud of my review. So here it is. Enjoy it if you like – hey, the play might come back to town someday, right?

In my time on this planet, I've been lucky enough to see a great many plays at Chicago's Goodman Theatre. I've a seen musical by Randy Newman, an exotic fable about mysterious princesses, stories about struggling parents and about the burden of Original Sin. The plays are often great, and even those with major failings are at least enjoyable. I was expecting Rock 'n' Roll to be one of those pleasant-but-not-great shows, straining to get a story across from behind the bars of classic rock tunes.

I really should have known better.

Rock 'n' Roll is, without question, the smartest and most philosophically resonant play I've ever seen at the goodman. Perhaps I should have expected this from world-famous playwright Tom Stoppard, but the name threw me off. In the play, rock and roll is used, quite literally, as a kind of protest against the oppression of communist Czechoslovakia. Stoppard avoids oversimplification of this process, however, making the entire show a dialogue on communist theory versus communist practice, with nothng left finalized except by history.

Set in the late sixties through the 1990, many events of the play focus on actual historical events and figures (Václav Havel, The Plastic People of the Universe, Syd Barrett), but to call Rock 'n' Roll a history lesson would be falsely reassuring. The charcters toss around the vernacular of Communist Europe without a pause - Dubček, October Revolution, Prague Spring. This causes a bit of a comprhension curve for younger viewers like myself, who didn't live though the decades the play occupies, and for older viewers who are unwilling to pay close attention. While my father and I came away from the show awed, intrigued, and ready to pour over Stoppard's script, much of the audience was clearly looking for something more accessible. Like me, that was likely what they were expecting. The show's fast pace, heavy subject matter, and collection of accents clearly left many feeling lost. As for me, I left wishing I'd been closer to the stage and eager to soak it all in all over again.