They Should've Gone with "It Is Finished"

Of course I'm bummed about my Bulls losing to the awful, horrible Heat in the playoffs. But, blasphemy aside, I am amused/distracted by how much D. Rose looks like Christ on the cross in this Tribune photo.

Of course, Jesus never chewed on his mouth guard. 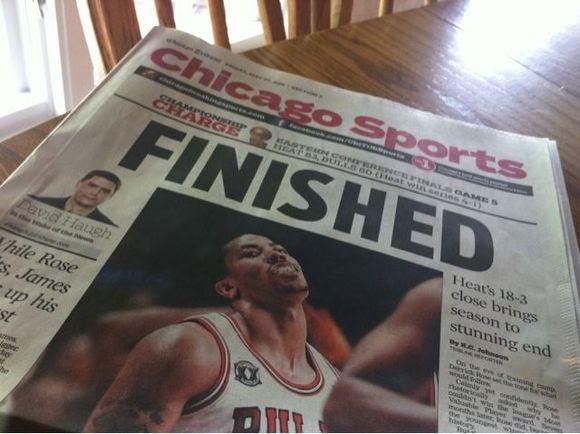 I'm a big fan of Roman numerals. Maybe it's because I'm a closet elitist and I know that my understanding of Roman numerals makes me better than you. Or, if not you, someone who knows less than you, or does fewer crossword puzzles.

Vanity aside, the fun thing about Roman numerals is how they manage to simplify some numbers and complicate others. Take dates, a commonly Roman-ed numeral form. This year, MMXI, that doesn't save us any button pressing when we type it. But back in 2000, we were at a nice-and-easy MM. What fun! Equally fun was the 1980s, but for opposite reasons. At the close of an episode of Taxi, got example, we might see the letters "MCMLXXXIII" which is a pretty hilarious way of saying "1983." Am I right?

The Super Bowl is one common way a lot of people come across Roman numerals. This year is Super Bowl XLV, which looks a million time cooler on advertisements than "45." And guess what, number (or football) fans? In just five years, it's gonna be Super Bowl L. Wow. That'll be easy to type.

Here's one of my favorite Roman numeral gags:

Things I Wrote This Week

In chronological order, and not including other PopSent posts, here's a list of me-on-web for the week of April 5th, 2010:

I've just started writing for the illustrious Chicago blog, Gapers Block! Thanks, John and Andrew. Last week I posted some news stories blurbs and links in the Merge section: this week, I was a little busier. First, I got to check out some new packaging and taste some beers from Arcadia Ales of Battle Creek, MI. I even met the owner, Tim Suprise. And I called him John. But he was cool about it.

The following day, I posted something I'm really proud of: a sports article. I only really care about one professional sport, and that's basketball (that would be a good question for a "Do-You-Know-Marissa" trivia game). Now, I'll be writing periodically about the Chicago Sky, one of the WNBA's youngest teams. I think of it as a collision of my love for basketball and my feminist politics...you don't have to, though. You can just think of it as sports writing. Thanks, Brian!

Finally, in movie news, I posted my thoughts on How to Train Your Dragon, which was a pretty decent little film. I didn't like it as much as Mary did, but I'm glad she was with me; later, when I got mad about how the adult Vikings had Scottish accents, she reminded me that Vikings also DIDN'T REALLY FIGHT DRAGONS, so maybe I shouldn't get too hung up on historical accuracy.