I have a little bit of catching up to do over at Cineplexus. Over the next week, look out for reviews of (chronologically) Cedar Rapids, Paul, and Win Win. I might even have some words about a little gem I just saw from 1941, Ball of Fire. Movie reviews, ho!

show/choir (and yours truly) featured on U of C site

I am really, really proud of this one.

Proud enough that I'm tossing modesty aside and actually telling people about it.

Right now, if you go to www.uchicago.edu, you will see a picture of my smiling face. And it's not because I'm a lovely and photogenic promotional model. It's because I made a movie. 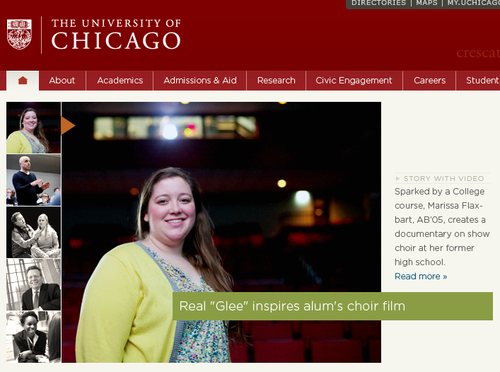 The best part of this article is the hook, which is that I "beat" Fox and Glee to knowing that showchoir is awesome. Which is true, even if the show did come out before the movie was officially complete. Neither here nor there. Let's focus on the story.

I Live in the BRIDESMAIDS Trailer

It's probably dangerous to say this on the internet, but what the hell. I'm excited.

In this trailer for Judd Apatow's upcoming movie, Bridesmaids (which start Kristen Wiig, and will therefore almost certainly be enjoyable), you can see the corner I live on.

On Oscar noms and being a bit behind

As you might have heard, Academy Award nominations were announced yesterday. I did see review several of the films nominated for best picture/actor/actress on Cineplexus, and I saw a few more that I didn't review. But my own movie project had me a seeing an all-time-low number of movies in the latter part of 2010, which is when most of these films were released. All things considered, I'm a little behind. Hopefully I'll be able to remedy this before Oscar Night, which falls on February 27th this year. Fingers crossed!

You called a movie
With Vince Vaughn and Kevin James
"The Dilemma". Well,

It may sound complex
But, Ron Howard, we all know
It's going to suck.

That one time when I made that movie

I've been on a bit of a blogging hiatus. In fact, I've been on a hiatus from a lot of things – not really writing for Gapers Block as much as I'm supposed to, not going to the movies a lot (which has made Cineplexus kind of a wasteland, sorry), and not posting updates to Sweet Valley Diaries, though I did read the book I'm supposed to recap next. It would all be very sad indeed, except for this one thing that I actually was doing.

I made a movie.

My movie, which is called show/choir and is a documentary (about, what else, showchoir) has been a long time in the making. I shot it with my friend Cole Murray in 2005 and 2006 (pre-Glee! I know, it's pretty crazy!) but I didn't have the resources or time to complete it until this summer and fall, which I spent editing away like a machine, except with more crying. Then, lo and behold, it was completed. And it was pretty good.

This past Friday, there was a world-premiere of the film at Chesterton High School in Chesterton, Indiana. In addition to being the setting for much of the film, CHS is where I went to high school, and where I participated in showchoir. The screening went really well and I got a lot of compliments on the film. I even got some press out of it! I myself was kind of a basket case the whole time, unable to gauge whether the film is even interesting, as I have now seen it about 7000 times. But I guess I'll take everyone's word for it that it was great. Hooray!

Now I begin the film festival submission process. Actually, facing a world where the onus of getting this movie made is not upon me is a bit like giving birth after a 5-year gestation, and now I am both excited and sad. But my film baby needs me to care for it in a different way now, I guess. In any case, I am hopeful for the film's success, but content in knowing that it is finished and that the hometown crowd was happy with it.

To see clips from the movie and follow it's progress through the festival circuit, check out showchoirdoc.com.

A Car and a Movie, but Not a Drive-In

This week, I posted an article about this cool thing I did called "Juke Ride Chicago" (#jukeridechi) on Gals' Guide. The Juke is a new Nissan sports-crossover that has a futuristic look and motorcycle-influenced design, sleeker than (but reminiscent of) a PT Crusier. They are released this Tuesday, October 5, but I've already driven one all over town. Fun!

I also just posted a review of The Social Network on Cineplexus. In it I said many things, but I didn't mention that Jesse Eisenberg is essentially the dramatic version of Michael Cera. They should start an acting movement and call it "Shrug-core". Never underestimate the power of negative body language!

I've got new reviews of two movies up on Cineplexus.

Things the movies have in common:

Directed by the writer(s)

There may be other things, but those are the biggies. Enjoy!

I've been posting up a storm today on the topic of Oscars 2010, over at my movie blog Cineplexus. I've got links to all the movies I've reviewed over the past year that are nominated for Oscars. If you want a list of nominees, check out Oscars.com. If you want a list of my thoughts on the nominated movies that I happen to have seen, there's nowhere to look but Cineplexus. :)

As a side note, I am especially bummed about one movie that missed the Oscar nom cut: 500 Days of Summer. At the very least, I feel it deserved a nomination for Best Original Screenplay. Sigh. At least the Hollywood Foreign Press Association (responsible for Golden Globe noms) saw things my way. Sort of.