What I Read on Tuesday

Tuesday of this week was a crisp, blank sheet of paper. I cannot overstate how much I revel in the occasional day with no scheduled events in sight – emphasis on "occasional," as living every day like this would get old fast.

When I say it was a day with nothing scheduled, I don't mean that there was nothing planned. I had two items written in my planner for the day: in large letters, the word "WRITE." In smaller script, just below: "read."

I spent a huge portion of the day writing, and it did my mind and soul a world of good. But also I read. A lot.

Here is what I read:

1. Several chapters of Ellie Kemper's memoir, My Squirrel Days. Instead of finishing it, I opted to save the final chapter for tomorrow. Ironically, as much as I relish being able to move on to the next book in my stack, I am rarely in a rush to turn a final page.

2. The second essay in Michiko Kakutani's The Poet at the Piano, a collection of reflective interviews with artists in their natural habitats. I read the first essay in the book months ago. It was about Saul Bellow. I had never read any Saul Bellow, so I stopped reading Poet at the Piano and got Seize the Day from the library. The essay I read today was about Jorge Luis Borges. I have not read much (any?) Borges. Any guesses what author's story collection I checked out from the library yesterday afternoon?

3. As an MFA graduation present, my dad got me a book called Daily Rituals by Mason Currey that documents the wildly varied habits and patters of hundreds of artists (as above, I use the term generally, to refer to writers, musicians, etc.). I feel by turns buffeted and devastated by this book. Sometimes it gives me ideas as to what rituals I could try; sometimes it makes me feel better about my own rituals; sometimes it makes me feel like a lazy asshole. This is why I have only read a quarter of the book. This day, though, something beautifully coincidental (if not marginally miraculous) happened. I opened the book to where I'd last left off, and one of the first passages I got to was about Toni Morrison, who just passed away at 88. 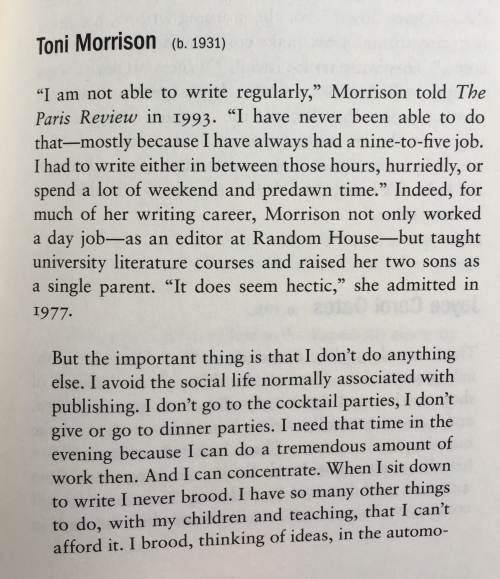 1993 was the year that Morrison won a Nobel Prize in Literature. Just sayin'.

5. All of issue No. 2 of a zine called Selfish. It was on a rack at the library and though I didn't know what it was, it called to me.

6. Half a chapter of Rainbow Rowell's Carry On. I was tempted to keep on, but this was getting ridiculous. I needed to eat dinner.

7. A chapter of the romance novel I'm currently reading, unfortunately titled The Husband Trap (book #1 in "The Trap Trilogy"!). Title aside, I'm quite enjoying this one, which I got from The Ripped Bodice's famous blind-read section (they wrap a book in colorful wrapping paper and slap on a cleverly worded enticement about the plot). I doubt that I would otherwise be reading a book called The Husband Trap. Then again, the titles of romance novels are, in my opinion, mostly terrible. Other romance novels I have read are called Wed Him Before You Bed Him, Any Duchess Will Do, and More than Seduction. I have only been reading romance novels for a year or two, so I have barely scratched the surface.

That's it! The other day I took a photo of my stack of recently acquired books that I'm excited to read ASAP. I thought it would make a fun, simple post. Almost none of these 7 items are a part of that stack. OH WELL! 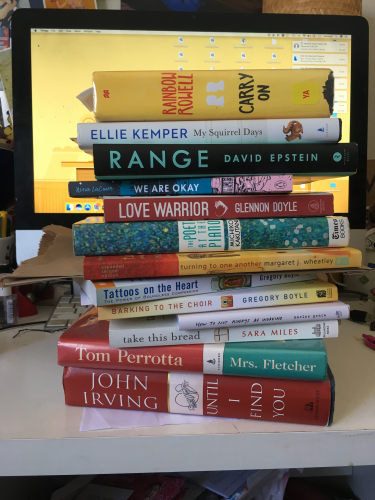