Yesterday, I took myself to see Ingrid Goes West, a movie I knew little about, except that it starred Aubrey Plaza and was a comedy, possibly of the trenchant variety. It turned out to be a terrific little film, but I’m not sure I’d call it a comedy. I think it was more of a thriller – think “Hitchock takes on Instagram.” It’s primarily the story of two women. The main character, Ingrid (Plaza) is an unstable woman, lonely, in mourning, and virtually friendless, and she uses social media (primarily Instagram, in fact) to combat her isolation. The other woman is Ingrid’s newest object of obsession, an Insta-famous LA lifestyle guru (or something like that) named Taylor Sloane (Elizabeth Olsen) who, while appearing to have her shit together, is in some ways no less hollow and out of touch than Ingrid herself.

It was funny. But it was also…unsettlingly familiar.

The setting was familiar; not only is it set in LA, but there’s a salon in the movie that’s down the street from my apartment. The people were familiar; from the carefully coiffed and behatted BoHo chic beauties to the angry, off-putting muscle bro to the nervous vaper to the bearded old-school hipster dude, these were versions of people I have seen and met in this strange city and in others. But it wasn’t until this morning that I realized the most unsettling familiarity of all: the loneliness itself, and the way social media fills that lonely space in much the same way Cool Ranch Doritos fill the stomach. It does the job, but not in a way that’s going to keep you healthy and alive.

Let me backpedal for clarity here: I would not describe myself as a lonely person, nor would I characterize my use of social media as obsessive or unhealthy. But I’m a human being, I long to connect with my fellow humans, and I have a smartphone near me almost all the time. Sometimes, I lose my way for a minute or an hour.

All week, I’ve been in a pretty bad mood for no good reason. I’m sure it’s part jet lag, part PMS, and it’s possible I’m still fighting back an illness that everyone in England seemed to get but me. That said, I think it is primarily a kind of withdrawal from my big trip. I spent nearly three weeks in a place and situation that was relatively peaceful, filled to overflowing with novelty, and by its very nature extremely spiritual. And now I’m back to my actual life — a life I like, a life I choose, a life that is absurdly full of blessing, and some days just plain absurd — and it’s like crashing back to earth after being weightless for most of August.

So what was different about my life in England? (Other than the beautiful surroundings and the novelty of the experience, which are both important to me but which we’ll count as given.) Well, I sang everyday, and sang evensong services most days. So I’ve been taking some time to listen to recordings of the Magnificat and Nunc Dimmittis, the texts that are set to music and sung as a central part of that service. Check. What else?

I don’t know if I’ve yet written about how cool it was to be surrounded by 35 people who I know and like and always have things to talk about with. If that sounds exhausting, keep in mind that it was easy to go off on your own, or hang out with two or three or eight or ten people pretty much anytime you wanted to. The loss of that opt-in social atmosphere, I realized yesterday, was a huge factor in my mood crash. All week, I’ve been happy whenever I’m with people, whether it’s one of my roommates or my trivia team or my volunteer group.  I was certainly on cloud 9 last night, when I was reunited with a few choir members for a trip to an English-pub-inspired restaurant that opened, with miraculous timing, less than a week after our return. But when I’ve been alone, I’ve been feeling lonely in a way I usually don’t.

So, back to Ingrid. I'm not much like her. I don’t like every photo in my feed. I don't do much obsessing over lives of strangers, remembering as often as possible that EVERY person's feed is almost all exclusively the prettiest parts of life. I don't write comments on celebrity Instagram posts. I find that my social media engagement is mostly to communicate with people I actually know, and I think that’s kind of nice. Furthermore, I fully acknowledge that I took a break from writing this post to download Boomerang and take a video of a potato chip. And I’m ok with that. But I do have this habit of reaching for my phone whenever I’m…I don’t know, not otherwise occupied? And the first thing I do, almost reflexively, without thinking, is open either Facebook or Instagram and check for notifications.

Why do we do this (“we” because I hope, and in fact KNOW, that I’m not alone here)? I tell myself that I want to stay on top of things, but I don’t check my email half as often. I think it’s just the easiest, fastest way to get that little jolt of outside connection. You don’t have to bother anyone. It will only take a moment. You don’t even have to pick a person to contact…you barely have to do anything. Just unlock your phone and tap and scroll.

But this morning, after I’d had good 18 hours to digest Ingrid Goes West and yet another bad-mood morning to consider and unpack, I had the most ironic realization. There is another thing about England that was different. I didn’t have any data.

I took my phone with me to England and got a plan with unlimited texting. I could use WiFi whenever it was available. But I had so low an amount of data to use (and overages ran 25¢ a megabyte!) that I turned it off entirely so I could save it for an emergency, like if I got lost. Furthermore, our hotel WiFi was pretty spotty. With the exception of nightly checkins with our choir Facebook group (primarily for logistics) and the occasional, slow-as-molasses Instagram post, I was off the social media grid. Lord knows I saw things every ten minutes I wanted to add to my feed, but most of the time I skipped it, because I wouldn’t actually be able to post until I got back to the hotel, if then.

So the irony: here I am, back at home, feeling lonely because I am no longer surrounded by friends all day long, but not quite knowing that I’m lonely, just that I feel kind of shitty.  I pick up my phone and look at social media for five minutes or ten. Unlike Ingrid, I do it absentmindedly, unaware that I’m craving human connection and with no purposeful intention of seeking it out via apps. But unconsciously, that’s exactly what it’s about. The thing is, I don’t just miss the people in England, I miss the peace I felt there. And not being able to reach for my phone was a huge part of that peace! It was the reason I was able to so fully engage with all the friends around me whose presence I’m missing now, and when I was alone, it was part of why I was able to look around and appreciate the here-and-now. It’s why I was able to soak it in, so I could hold onto clear memories of there-and-then.

So what do I do? I'm not really interested in quitting social media or ditching my data plan. Connection is valuable and valued. We can't simultaneously disconnect our way to inner peace and engage in 21st Century life and work. But we can be conscientious about the ways, whys, and hows of our digital connection.  When it comes to the nourishing act of human connection, likes and notifications are tasty junk food. I think I just have to catch myself if I start to binge. 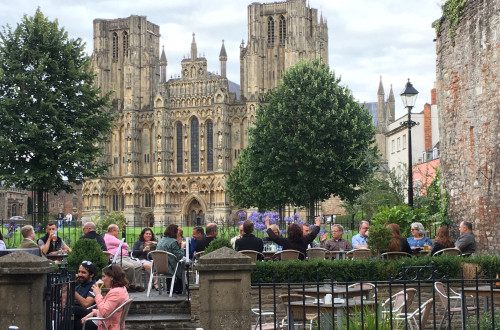 Just a casual hang with 20 friends in the shadow of a medieval cathedral.