Who Could Ever Be Tired of Bath? 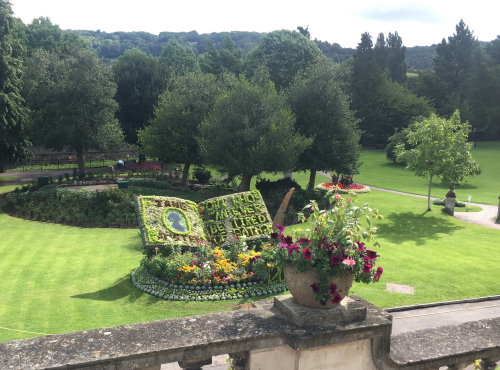 In an effort to get into the spirit for my England trip (or maybe just to tamp down my intense longing for the English countryside), I decided to read a book set in England in the weeks before I left. I chose Elizabeth Gaskell's Cranford, a gorgeous edition of which had been sitting on my shelf for so long that there was a receipt from Borders inside. I thought about the book often while I was in England, especially when we spent a day in Bath. We were told about how well-to-do people were often carried about the streets in sedan chairs, and I thought of how the ladies of Cranford walk alongside a sedan chair that while only the oldest and weakest of their number is carried down the walk, and inside once they reach their destination.

Now that I am back, reading a book set in the rolling green hills of the English Countryside seems even more desperately necessary to ease me back into life outside of them. Rather than choosing something modern, I'm going to stick with my 19th Century romanticism and read one of the Jane Austen titles I haven't gotten to before now: Northanger Abbey.

This choice ties me back to my trip in two ways. The first is also related to Bath: Austen lived in the city for five miserable years (I was far more enchanted with the city than she was). Our tour guide mentioned Austen several times, explaining that Bath figures into two of her novels. In Northanger Abbey, written before Austen's stint in Bath, the city is painted in a more favorable light than in Persuasion, which was written after the end of Austen's five years there. Apparently she didn't write a word the whole time she lived there. Talk about hell on earth for a writer. That being said, I can't imagine having writer's block in a place as vibrant and beautiful as I found Bath to be. But so the story goes, and the forced change in scenery was surely no help to her mood.

The other connection to my trip comes by way of another day trip, this one to Oxford. While there, I went to a museum exhibit called "Which Jane Austen?" that displayed, among other things, a number of diary entires, personal works, and letters to paint a portrait of Ms. Austen throughout her short life (she died at 41, presumably of Addison's disease). Staring through the glass at pages from skits and plays that Jane wrote at 13 or 14, I was suddenly conscious of how precious these documents felt to me. Seeing someone's own handwriting is almost like seeing the person herself, especially for a lettering enthusiast like myself. What's more (if you'll forgive the self-importance of the comparison) I was reminded of my own girlhood practice of writing silly plays and skits, and of the sage wisdom that what you did for fun as a kid can be a good indication of what occupation will give you the most fulfillment. I sometimes think of my childhood scripts and doll family storylines when I'm looking for motivation to persevere in my chosen field. Did Jane do the same?

I'm looking forward to communing with her, and with England, in the coming weeks, via Northanger Abbey.