So, tomorrow (TOMORROW TOMORROW TOMORROW TOMORROW!) I am heading to England for several magical weeks of choral cathedral singing. I am in pretty good shape prep-wise (I've been mostly packed since Saturday, because I'm just that excited), but I'm still trying to keep things simple today as I take care of last-minute details. In that spirit, here are three little...oh, let's call them "gems" in place of one longer post.

1. This morning I got to my bon voyage brunch with Nick a little early. No sooner did I sit down but I spotted some unexpected color on my menu. I was in very high spirits already, and as I've written before, the mystical power (aka science) of the prism is deeply heartening to me. I decided to break out my notebook and have some fun, Maybe I could have aimed for something deeper, or played with shape a bit more, but I felt like had to act fast before the light changed? I don't know if that was a real risk or not, but either way I wasn't going to be alone in my whimsical brain world for much longer. The waitress would be back with coffee any moment...must...snap...insta...capture...moment!

2. Much to my surprise and delight, yesterday's post sparked a conversation with a friend about the struggle to "pay attention" when it feels like our careers demand that we do everything at once -- that we MUST attempt to multitask or else we're doing it wrong. This isn't unique to creative careers, but it definitely feels like any job where you're bossing yourself has an added layer of guilt and stress in connection to "the hustle." Here's a bit of what we were struggling with: 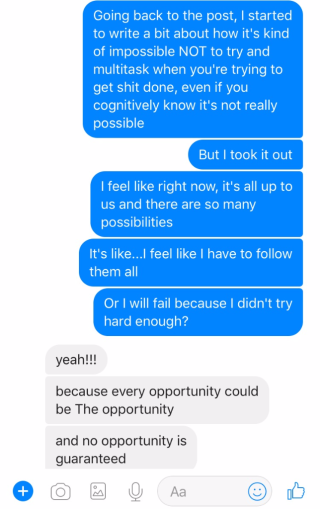 Again, I think it's important to remind ourselves that we live our present lives, not our future lives. No matter how much we acheive, our present lives will always hold more value than any theoretical future. And on that note...

3. Here's a quote I pulled from Elizabeth Gaskell's Cranford (which I finished this morning!). I picked it for my florilegia, but I'll let it stand alone here.

“My father once made us," she began, "keep a diary in two columns; on one side we were to put down in the morning what we thought would be the course and events of the coming day, and at night we were to put down on the other side what really had happened. It would be to some people rather a sad way of telling their lives" – (a tear dropped upon my hand at these words) – "I don’t mean that mine has been sad, only so very different to what I expected.”
(Cranford, Elizabeth Gaskell, Ch. XI, p. 127)