« The Tourists Become the Attraction | Main | Back Home (Looking) for Good »

The Family that Tours Together, With and Without the Guidebook

Note that I began the below while I was still in Salisbury; I'm now in London, but I hadn't made time to finish/proof/post it until now. What a delightful whirlwind it's been!

Last Wednesday, after a week and a half of very lovely events, the loveliest yet happened: my family arrived in England! My dad, Aunts Linda and Sue, and Uncle Dan are spending the next few days here in Salisbury before departing on a coach tour around England.

Talk about a quartet of dedicated pilgrims: nearly the first thing they did – after eight hours on a plane (more for Aunt Linda, who'd first flown to Chicago from New Mexico), 3 hours at Heathrow waiting for a bus, and 2 more on that bus, bound for Salisbury – was to show up at Wednesday's evensong service. After the service, I slipped back around to the transept to greet them before divesting. Because I was still wearing my robes, I got a bonus treat: two older English ladies descended upon me to tell me how wonderful the choir was, giving specific compliments to our diction and dynamics (two of the things we get the most chiding about from our directors). It would have been a pleasure to have this flattering "meet the public" moment in any case, but the fact that my family was standing feet away made it even sweeter.

The next morning we all (that is, the four Flaxbarts and a Borgman) got up bright and early to take a train to Oxford. Well, it was two trains, the first half being a peaceful and leisurely ride in an nearly empty, very comfortable South Western Railway car to Basingstoke, and the second being a Cross Country train so jam-packed with youths bound for the Reading Festival that we could barely get onto the train. Rather than stand up to let people pass, the girls closest to the doors decided it would be best if they remained seated on the floor of the train, curled into balls and hugging their suitcases to their legs. They were mistaken. But we got through and two businessmen even gave up their seats for my aunts. Reading was the next stop, so we had more space for the most of the ride. Armed with the 2016 Rick Steves guide to London and his diagrammed walking tour of Oxford (which Uncle Dan had carefully studied and even photographed so that he wouldn't have to keep referring to the paperback) we arrived at our destination before 10am.

Oxford was beautiful and crowded seemingly full of both tourists and students, a more diverse and international crowd than the other cities I've visited so far on this trip. We made an unplanned stop almost immediately when we saw there was a street market going. I bought a small vintage tin with a typewriter manufacturer's logo on it, and we decided to come back for lunch.

Uncle Dan pressed ahead as the rest of us dawdled half a block behind him. We figured he was making a beeline for the tourism bureau and were delighted when he stopped us in front of a fudge shop handing out free samples. Unplanned stops can be fun for the whole family! Dad bought a block of chocolate orange fudge that we miraculously snacked on only once that afternoon.

Oxford is made up of several colleges, and each charges a small entry fee (presumably to curb lookie-loo tourism through their working school). We opted to visit Balliol College, which Mr. Steves suggested was the best bang for your pound. At the gate, the ticket agent asked if we had "any concessions." I puzzled over the idea of pre-ordering popcorn and soda for our tour for a moment before he explained that concessions were the lower prices for seniors, students, etc. Sure enough, we had four concessions, and all five of us got into Balliol College for £7 flat. Rick Steves, right again.

This stroll was a highlight of the day. The college chapel was small but richly arrayed in dark wood and stained glass. The courtyards had beautiful gardens inside, complete with a centuries-old mulberry tree. Bowed and craggy, it was still producing fruit. My favorite part of Balliol was the great hall, which looked so much like my own college's great hall (University of Chicago's Reynolds Club), right down to the portraits of past presidents on the walls, that I spontaneously laughed out loud when I saw it. 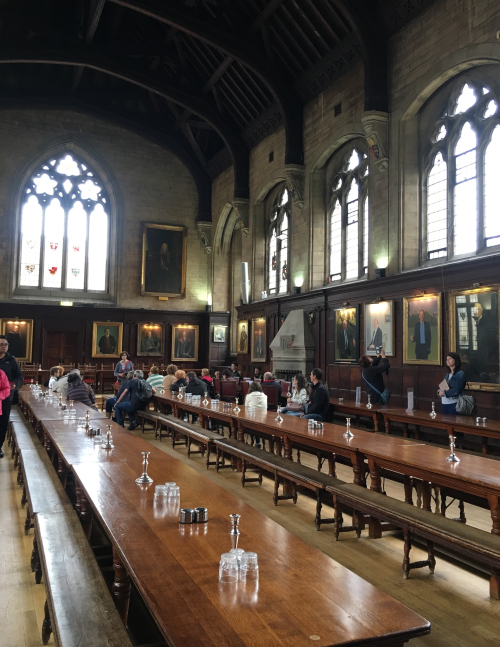 We saw a lot of history in Oxford: Jane Austen's girlhoood skits and later letters, written in her own hand; the site where Thomas Cranmer was meant to recant his Protestantism for Queen Mary before an audience, but instead opted to deny her demand and walk, smiling, to the stake; a variety of some of the earliest and rarest telescopes, chemistry sets, and astrolabes (which, as our tour guide gleefully explained, were technically "computers"). But one of the things I've learned and love about traveling in Europe is that you don't need a museum to see history: you can just look around where you stand. Back in Salisbury, that meant that, for example, the Boston Tea Party (a cheekily-named chain coffeehouse) was also a 14th-Century building that had previously been a hangout for Shakespeare. In Wells, it mean that some of the church employees live in precious little homes that line England's oldest residential street. In Oxford, it meant that some of the best sights were in the details. We stopped at the Divinity School, a location many Harry Potter fans will recognize as the infirmary where Harry spends so much time in the films. No Harry Potter fanboy, Uncle Dan nevertheless marveled at the sparsely decorated room for a good long time: he was looking up, at the intricately carved ceiling. Or was it carv don't imagine the technique is lost to history, but it is unlike any ceiling you'd find in a modern building. Uncle Dan asked, and pondered as he stared, "how did they DO that?" To which we all responded with more pondering and more staring.

It's challenging -- daunting even -- when so much is happening every day, to report on the day at all (which is why I haven't been doing it as much as I imagined I would). I have photos and brochures to remind me of where I went, ticket stubs and metadata to remind me of when. What  I feel more desperate to record are the little moments and interactions that don't come with tickets or concessions. I skipped over our lunch at the market, where a Hungarian guy who used to work for Princess Cruises sold us delicious meals after pitching them to us with gusto; as we ate them, a local passed by and told us we'd made the right choice. Then a bird shit on my dad's shoulder and when I went to grab a squirt of hand sanitizer after cleaning it off, I overheard the same waiter talking to two young customers in Hungarian. I'm skipping the evensong at Christ Church Cathedral that wasn't really an evensong at all, but a "said Eucharist with hymns." A family of loud hymn singers, we did our best despite the complexity inherent in reading a British hymnal (the music and lyrics are separated). We drank pints and half pints at the oldest pub in Oxford, The Bear, but not before we walked right past the street it was on; when we went back, it was as if a street magically appeared where none was before. When I asked a fellow who seemed to be a  regular where the beer garden was, he pointed the way, adding "...it's not a garden." Before we caught our train home, my dad and I went searching for coffee but couldn't find any until we got to the train station. Once there, we skipped the americanos and opted for some kind of sweet orangey coffee drink (his idea). I was glad we knew exactly what trains to take home, glad we'd planned some attractions to hit, and absolutely just as glad for all the moments when we ignored the guidebook and did whatever we wanted.