Pilgrimage to the Edge of the Everyday World

I wrote the following post yesterday (Thursday, August 17) for the daily travelogue being shared on the Music at All Saints' Beverly Hills Facebook page. Take a look at the page for more updates and perspectives on the trip from people besides myself!

Today, after three days of multiple rehearsals and daily evensong services, and before we begin a 7-day stretch of singing for hours each day, we took a day off. Most of the choir joined in a group excursion to Bath, about an hour’s coach ride from Wells.

A city of just under 100,000 people situated on the Avon River, Bath is a place where a rich Victorian, Renaissance, Medieval, and Ancient history are all on glorious display, and choosing how to spend our hours there was no simple feat. After our guided tour, I decided I couldn’t miss the attraction that is the town’s namesake: the Roman Baths.

Beginning in the first century AD, citizens across the Roman Empire would come to these baths, both as a religious ritual and social activity, and some would even make pilgrimage there from the continent to worship the goddess Sulis Minerva. Just as Wells was deemed a sacred site because of its clear natural springs (the eponymous “wells”), the hot springs of Bath marked it as a place to commune with the gods. As we approached the Sacred Spring, that fount from which Sulis Minerva’s blessings were believed to flow, I was struck by the words my automated audio guide whispered reverently into my ear:

“To stand where you are standing now was to find yourself on the very edge of the everyday world. Here, at the Sacred Spring, was the place where humans could communicate with the immortal gods.”

This is what our pilgrimage is about too. In fact, it’s what every service we sing is about.

As members of the choir, particularly when leading a choral evensong, we are in a unique position: we are both instruments of the liturgical process and participants in that process. In singing, we seek to help the assembled find their way to that precious precipice between the mundane and sacred, the “edge of the everyday world,” where we can commune with the Divine. But make no mistake, we also seek to discover that precipice for ourselves!

It doesn't always come, that feeling of transcendence. When it does, it is often for only a fleeting moment. I heard those recorded words in Bath, and I thought of Tuesday evening’s eucharist, as I exited the quire at the close of the service to see a haze of incense filling the outer sanctuary beyond, smoke all alight as the still-bright evening sun streamed in through the high stained glass. It was, for me, a brief but breathtaking taste of the divine.

A marvelous side effect of getting to sing so often in a place with as rich and ancient a devotional history as Wells Cathedral is that we get so many opportunities to seek that passing nirvana. I am grateful that I will get another chance to seek it tomorrow, and for the next six days after that. And if I don’t find it, I can still be sure that our work, our shared passion, the resplendent music we sing — the sacred words of which are incorporated thoughtfully into every evening’s prayers — will guide the way there for someone who worships alongside us. 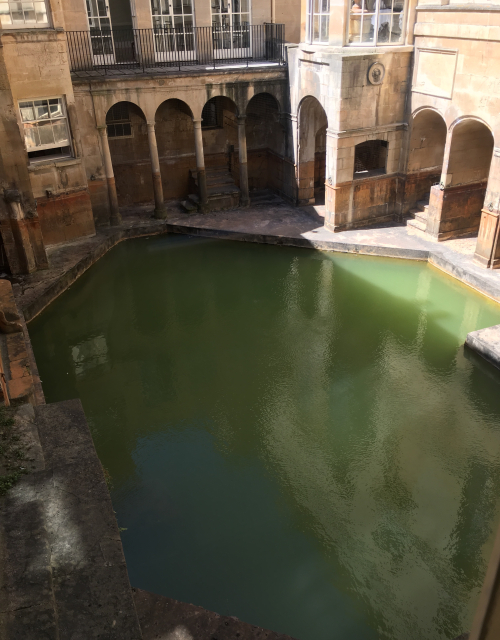