Partly Cloudy on the Cathedral Green

First full day in Wells. I'm determined to enjoy and fully embrace this occasion I've awaited for so long, but there's a wrinkle in the plan that's impossible to deny: my body has revolted. The issue isn't jet leg or food poisoning or even a cold; ever since the last few hours of the 10-hour airplane ride, I've been having an intense allergic reaction to breathing the air. Any air.

It's just the left side of my face. My left eye isn't itchy, but it's watering profusely (I told a couple of my traveling companions that no sleep made me quick to tears, and once the watering started they were afraid something had gotten me verklempt). But the primary symptom is the continuous feeling that I have to sneeze, accompanied by very few actual sneezes and a left nostril that's dripping like a leaky faucet.

But this town! It's so sweetly unfamiliar. The massive, stately Wells Cathedral anchors it, and a shockingly small but vibrant town of pubs, hotels, restaurants, and shops pack the twisty, cobblestone streets. Water flows through a narrow stone gutter down the high street and I've seen several people walking their dogs down there just so the pets can splash down the watery path while the owners stay dry on the sidewalk. 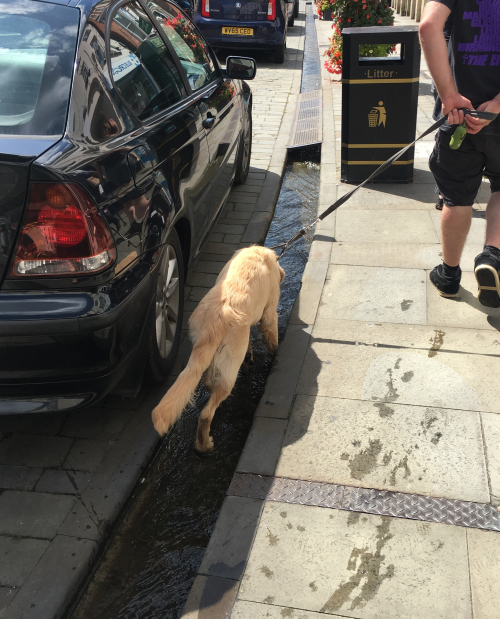 The cathedral is flanked by a large lawn, the "Cathedral Green," where people frolic in the shadow of the ornate and lovely town centerpiece. I'm sitting here as I write this, having just purchased my third allergy remedy in an attempt to shake my would-be sneeze. I picked up my camera to capture the moment -- snippets of Italian from other tourists (folks visit from all over just to see the 13th Century cathedral), kids kicking a soccer ball around, a peaceful, cloud-speckled sky, strains of "Que Sera Sera" piping in from a flute in an unseen corridor; and me in the middle of it all, plowing though a pack of Boots tissues. Watching though the camera's lens, I'm able to step out of my clouded head and see how beautiful it all is. And I'm sure it's partly because I'm underslept, but the simple, marvelous peace of it all is enough to get me verklempt for real.

The bells have just begun to chime, calling everyone in to the evensong service that, after today, I'll be singing all week long. Whatever will be will be. I'll take this third medicine, pray that it works, and know that even if it doesn't, I'm in a sacred place with people who are sacred to me, singing sacred music. Histamines be damned: going to be a good week.