« The Family that Tours Together, With and Without the Guidebook | Main | Who Could Ever Be Tired of Bath? »

Back Home (Looking) for Good

I have returned to these United States, back to a grisly heatwave in beautiful, sunny Los Angeles, back to the traffic in my sprawling, diverse adopted home. In case it’s not clear from all those conflicting descriptors, I am teetering on the razor’s edge between “not at all ready to be back” and “grateful for a fresh start at back-to-normal.”

When I left for this trip, which was characterized by the planners as a “pilgrimage,” I expected that I would have experiences during the trip that moved me. And I did -- I am, it should be stated here, constitutionally prone to being moved. But while I was expecting fleeting moments of joy or transcendence, I was struck surprised by the cumulative effect of this trip. Day after day, we sang in these ancient cathedrals, repeating a daily ritual that was virtually the same in Wells as in Salisbury, and not much different in either place than the monthly evensongs we have back at All Saints Beverly Hills. The ritual itself was the same, but the repetition was new. It made an already special experience (there MUST be a better word for it than “special” but I’m jet lagged over here) into something ancient and transformative, as we added our voices to the centuries -- the near millennium -- of voices raised in these spaces. I attended an entire season’s worth of church in just two weeks, but I have to confess, I miss the evensongs already. 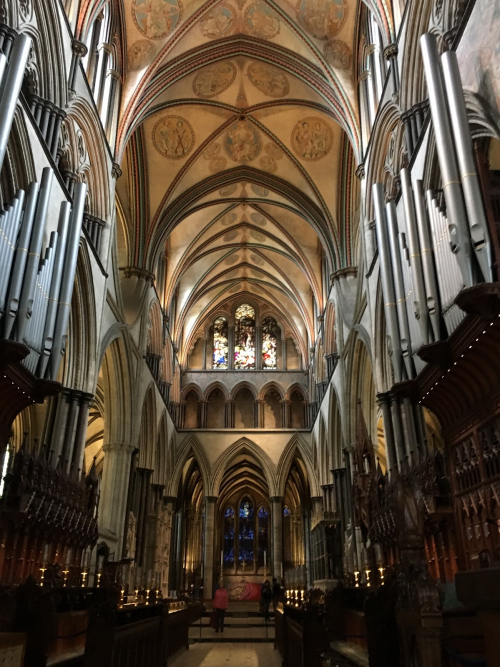 Had I been a congregant attending evensong I might have described these services as an opportunity to get out of my own head and meditate on the beauty of music and poetry (if you’re spiritually inclined but church-shy, I’d recommend finding one as a good way to commune with the Divine, however you care to name it). But we were there to sing, and sing well, and a lot of our music is really hard, with clashing harmonies and zig-zagging time signatures. What’s more, it was our job to know when to stand and sing, when to sit and listen, when to turn and face the altar, when to bow and when to chant. But this meant being even more clued into the ritual of it all, because the better we knew the order of things, the more we could relax. And so, the ritual -- the mere process of reflective repetition -- worked its magic as the days went on.

This is already more than I meant to say about evensong in this particular post, but I mention all this to put into context a particular thought that came to mind unbidden near the end of my time in Salisbury, our second of the two cathedrals. I found myself very earnestly desiring to shift the nature of my thoughts and prayers away from the things I yearn for but do not have The “very earnest” part is important here; certainly I’d thought about gratitude a lot before, but knowing you ought to focus on your blessings is a different thing than actually wanting to do so. I am a natural silver-linings finder, but this was about more than just seeing the good in a bad situation. This was a prayer about prayer itself: that I might be able to spend mental energy being grateful for my life and its present beauty, instead of on wishes for my future life. I’m not sure where this thought came from, except that I was enjoying a once-in-a-lifetime trip to England, and was allowed the time, contemplation, and repetitive sacred space to realize that I wanted to be more thankful for the experience than sorry it would have to end.

And so I am back, and I have to put my money where my mouth is. Do I wish that the man in front of me on the plane hadn’t had his seat fully reclined the whole time? Yes. But I’m grateful that I had empty seats beside me and lots of good movies to watch on the flight, so I’ll focus on that. Do I wish that I had managed to throw away the British apple core I carried off the airplane before the customs agent saw it and sent me to a secondary screening line (filled with people bringing back huge boxes of fruit and such) so that I could dispose of it? Yes, of course. But I’m grateful that it didn’t add much time to my exit. Is the traffic loop at LAX one of the most absurdly frustrating clusterfucks known to man? Yes, but my Lyft home was only $31.

Today, I’m honestly struggling a bit to be thrilled that I’m home. I’m missing the lovely continental breakfast we got at our hotel. I miss the way that every beverage in England was a kind of a production -- order a cup of tea “to stay” (for here) and you’d receive a tray with a pot, a cup and saucer, a spoon, sugar, milk, and maybe even a strainer and timer. Lord knows I miss the cool air; it was in the 60s and 70s our whole trip, and I’ve come home to severe heat warnings city-wide, even for the beach cities. I miss walking everywhere; my car’s AC is broken.

But I’m working up a list of things I’m so happy to have back. My soft, comfortable bed is at the top, followed by three related items: my first cup of coffee, my second cup of coffee, and the iced cold brew (with half and half) I just grabbed from my usual place. Remember that thing about beverages being a production? In England, much as in Europe, “coffee” means freshly pulled espresso and hot water if you’re lucky, instant powder if you’re not. The Americanos and lattes were lovely, but they weren’t coffee. And the only cold coffee beverage I drank in England was a delicious, but almost hilariously convoluted affair. The other thing I’m thrilled about is the opportunity to start fresh. A new month, a clean slate, an empty datebook and several exciting ventures to fill it with. It’s all very exciting -- or it will be, as soon as I get my notebooks in front of me and just a little more sleep.

The pace of my days singing in and exploring England was such that I still have a great many stories to tell, and I hope to continue doing that over the next few days or weeks. As I write, the bittersweet feeling of reminiscence will likely beckon me over to the realm of the melancholy. Hopefully, I won’t heed that call, instead treasuring the almost magical opportunity to walk the grounds of my memory palace and retreat to the cool, mystic meadows of the past two and a half weeks.