« Lettering Wisdom for Laundry Day | Main | Where Do You Come From? »

A Twig in Dirt

When I first moved into my current apartment, my new stairway was strewn not with roses, but with tiny greenish-brown branches. Over the past few years, the three-story outdoor walk up to my place has become so rote that I needn’t give the faintest thought to a single step, instead using my climbing time to daydream about cookies I might bake or try to deny how badly I have to pee after spending an hour in the car to drive eight miles across town. But on move-in day, the stairs were new, and I couldn’t help but notice that the previous tenants, on their way out, had chucked a huge potted succulent over the barrier wall, scattering bits and branches of the plant all along the stairs in the process. It was a jade plant.

I get great joy from admiring plants, and many of their names seem to have seeped into my consciousness via my father and his family, who always seem to know what every flower is called. But I’ve never had a garden of my own, and I’d rarely had so much as a houseplant at the time I last moved. And yet I briefly mourned, not knowing why, this discarded creature whom its owners had flung back to the dirt. Remembering something I’d heard (perhaps from my cousin’s green-thumbed husband) about succulent propagation, I snagged one of the woody branches that had fallen onto the steps of my new home, and I took it inside.

Everything I know about propagating succulents — the process of taking a tiny piece of one plant and letting it create new roots of its own, thus making an entirely new plant; the same plant, and yet different – I learned via a quick web search and a couple of gardeners’ blog posts. Following instructions, I cut a fresh edge on my foundling jade (my “adopted” plant), waited for it to “scab over,” let that rest on top of some soil for a couple of weeks to sprout what I hoped were roots. And then. I planted a twig in a pot of loose, rocky soil. I felt a bit like I was in a fable, trying to make soup from a stone, except without all the other people and ingredients that make that story’s magic work.

How can you stick a twig in dirt and expect a plant to grow?

That was three years ago, almost to the day. Every time I look at my adopted plant, I marvel at how much taller and stronger it is than when I found it on my steps. I was a proud parent when I noted its first new laughed with maniacal glee when I saw that it had sprouted a second tall shoot. What was happening, unseen beneath the soil, that made such a thing possible?

I have several more succulents now, and even a non-succulent houseplant (which amazes me regularly with its ability to rise, full and fleshy, from apparent death-by-dehydration). Some are store bought. One I got as a prize for putting my name on a mailing list. But most are foundlings. One little pot on my porch is shared by three scrappy little twigs, two of which I had almost no hope for. But just this morning, I noticed: one of those little scraps has sprouted new growth. From its shriveled right arm, tiny somethings have blossomed in my favorite color: vivid, blindingly vivid green. 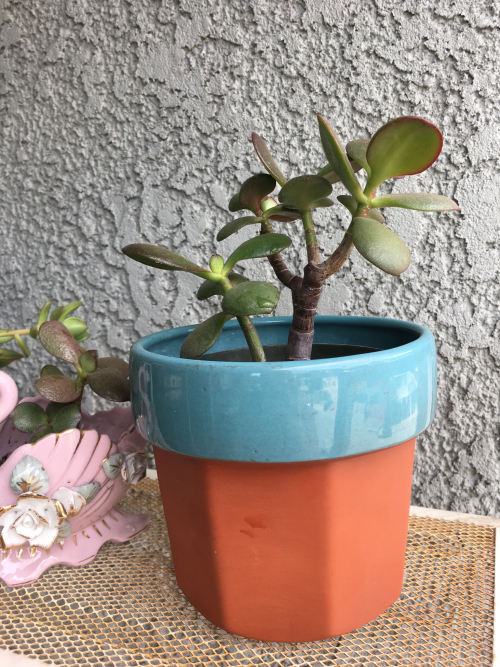 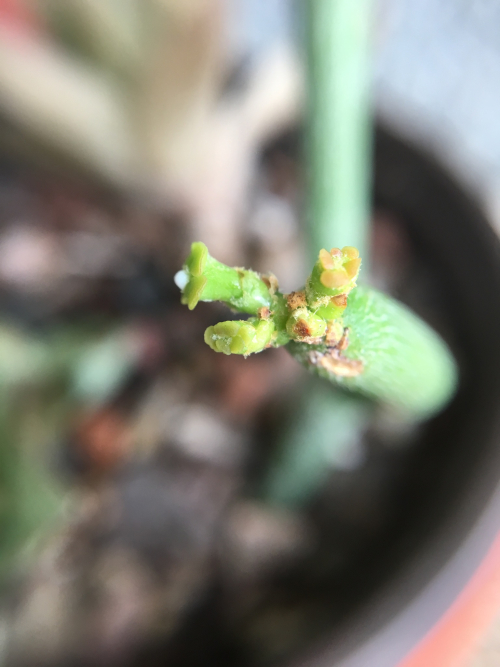 UPDATE: I just found an old photo of my "twig" jade plant on the day I first noticed it had sprouted new growth. Hard to believe it's the same plant as the above left! 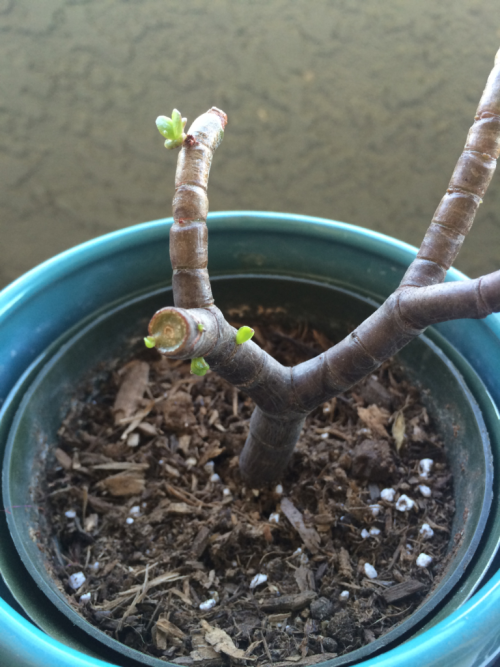