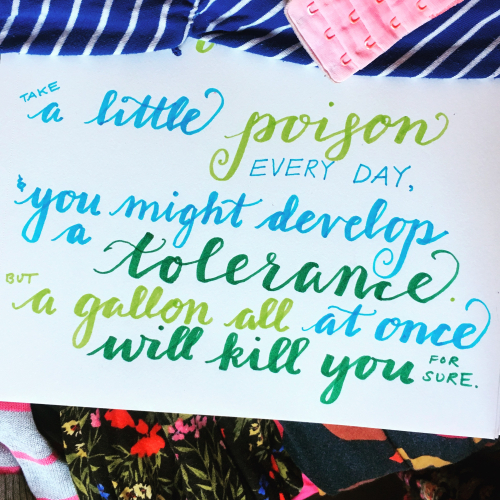 I have always, ALWAYS hated doing laundry. I've had to do my own laundry since I was 15, and the closest I've ever been to the laundry room was the lone year I lived in a house that required only one flight of stairs and a walk across the house.

Because there is only one washing machine in my apartment building (meaning you can really only do one load at once) letting my clothes pile up into several loads means I either have to spend literal hours running up and down the stairs at 30 minute intervals, or I have to haul the whole business to the laundromat. Which is worse? No, seriously, which, because they both sound just terrible to me.

As I've gotten older, I've realized how this laundry dread begets a dread cycle: the longer I wait, the bigger the laundry pile gets, and the more work the chore itself becomes, thus rendering it that much more dreadful. Now that I've gotten into goal setting and habit-creation, I can see that doing a smaller load, say, once a week (like my mother, my grandmothers, my aunts would have done at minimum, but this is my life we're talking about) would be so much simpler and easier, so much less dreadful. But because I think of laundry as such an onerous task, weekly laundry day is a habit I struggle to set.

After putting this laundry conundrum behind me earlier today (I opted for the laundromat to save time), I found myself complaining to my roommate about the state of my bedroom. After a period of regular upkeep, I'd let the room I use for both sleeping and working become enough of a cluttered hellscape that the prospect of cleaning it was almost as bad as the prospect of trying to write in it (I'm typing this at the dining room table). Then I stopped complaining, I sat down with my markers and my new pad of paper, and thought about what wisdom I had to share from my day. This is what I came up with.

"Take a little poison every day, and you might just develop a tolerance. But a gallon all at once will kill you."

Laundry is my iocane powder. And damn it, I aim to develop a tolerance.