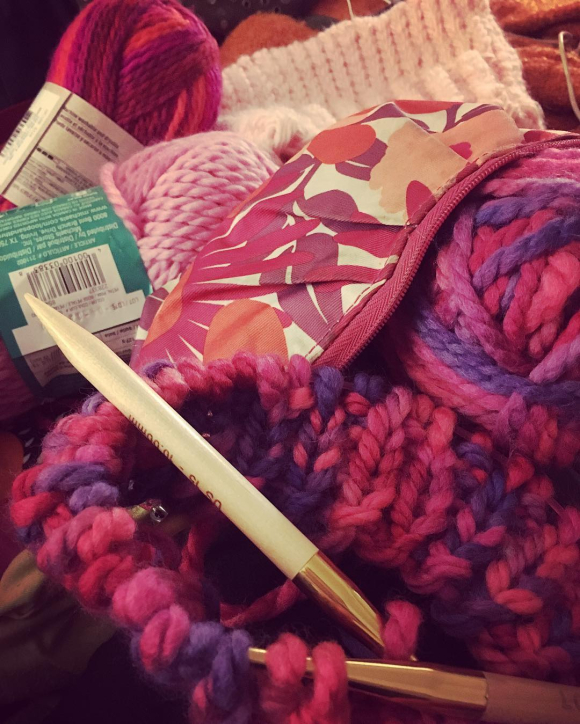 So here I sit. Working on my fourth #pussyhat. I sent two to D.C. earlier this week. I hope to make at least two more before Saturday for myself and friends at the L.A. sister march.

I found out about the Pussy Hat Project just a few weeks ago when the lovely Kim (a badass lawyer and mother of three grown kids) with whom I sing in the church choir, posted a link about it on Facebook. The post didn't set the world on fire, but it lit my heart up – I was as excited about this as Kim was. I had thought about attending the Women's March on Washington but logistically (and financially) it made more sense for me to stay in Los Angeles and march here. Now, not only could I send a part of myself to D.C., but I'd be joining women all over the country in using a domestic art – a.k.a. "women's work" – as a form of protest.

But wait. A part of myself? We are still talking about a hat here. A squarish, pink hat that kinda forms cat ears when you put it on. And I don't think that just *having made it myself* makes a thing "of myself," necessarily. Or does it?

When I knit, I think about my mother, who has been gone for more that half of my still-short life. It's impossible not to think of her: half my knitting stuff is hers. She kept her dpns and circular needles in a green paper tea box that her last boss (she was, at the end of her life, secretary to Nobel Laureate economist Gary Becker) brought back with him from Japan. I still keep the short needles in there, and have added more sizes over the years.

When I knit, I think of my grandmother. She kept her yarn and old patterns in this ridiculous-looking but clever folding basket that, judging by its bold, rust-and-goldenrod floral pattern, must have been manufactured no later than the '70s (a decade that saw the last of her three kids finish high school; she would go back to work in HR and stay until well into her 70s herself). I still keep her yarn in there, and have added as much of my to the stash as will fit.

When I knit, I think of Laura, still living, who taught me to knit when I was 15 and my mother's death, still fresh, had not yet become the defining ache of my existence, but was more of a practical fact I strived to work around. My mother learned to knit as an adult because of people like Laura, friends she'd met on the commuter train who knit to pass the time, to have something to show for their daily two hours in transit to and from jobs in the city. My mother had intended to teach me to knit someday. She also had left behind a lot of yarn and supplies and Laura lovingly and patiently showed me how to turn them into handmade objects of function and beauty. Laura took the time to do this while her toddler twin girls (who are now in college) were sleeping.

Knitting anything at all knits me to these women who made me, who nurtured me, who taught me the power of a woman's busy hands. And not just to my mom, my grandma, Laura, and Kim, but to my Aunt Linda, who is always – ALWAYS – crocheting squares for yet another blanket for needy children, and to my cousin Meghan, like a sister to me, who messaged me just yesterday with a photo of her own pussy hat. She'd learned to crochet just so she could make one.

I feel the power of my mother's eye-rolling ire when I say: We American women know our strength, we know our rights, and we refuse to sit idly by while old, white men legislate our lives and bodies as if there's nothing amiss, and do so under a man who openly derides and harasses and feels entitled to assault any woman he chooses. And so, pussyhatted or not, we're taking to the streets. To say, loudly, that we represent over half of America, and that we will not rest until we feel represented, heard, safe, and for God's sake, EQUAL. I will march to state my desire to continue striving for justice for all Americans. To proclaim my intention to shine magical rainbow rays of love into every dark, frightened corner of this world that I encounter, as much as I am able. To demand that my country love me back.

For those women who taught me my power and guided me to my voice, thank you. You are woven into the fabric of me, and I will wear your lessons into whatever the future holds.