« Having some fun with an app I downloaded last night on a whim, Tayasui Sketches. Would it be MORE or LESS fun if I had an iPad and a stylus? 😉 #tayasuisketches | Main | via Instagram »

I MADE UP A RECIPE! Pan-Fried Brussels Sprouts and Garlic Tagliatelle

This has never been a food blog, but it’s my blog, and I’ll post a recipe if I want to.

My favorite thing about living in Silver Lake is the farmers market on Sunset and Maltman. As a woman who spent her first few decades of life in Chicagoland, the mere fact of a year-round outdoor marketplace where local famers sell what’s fresh continues to blow my mind month after sunny month. And while a gigantic, quad-destroying hill stands between the farmers market and my apartment, it is technically just a short walk down the street from my apartment.

As long as you're just shopping for fruits and vegetables (and not artisan Himalayan salt blends or bags of organic coffee beans hand- roasted by bearded harmonica players at a local monastery) the farmers market is actually a super cheap place to get your groceries. Since they only sell what’s fresh, I can’t get everything there. But a venture to the market in support of my first attempt at from-strath chicken noodle soup proved to be a veritable produce bonanza. They not only had onions and carrots, but also celery and rosemary and freaking fresh BAY LEAVES – on a sprig, for a dollar. One booth that had gorgeous celery and carrots (but nothing else I needed) was offering a 3-for-$5 special. Did I want a third item? the proprietress asked, adding that it could be literally anything in the booth. Wow.

And so I went home with a big bag of Brussels sprouts. 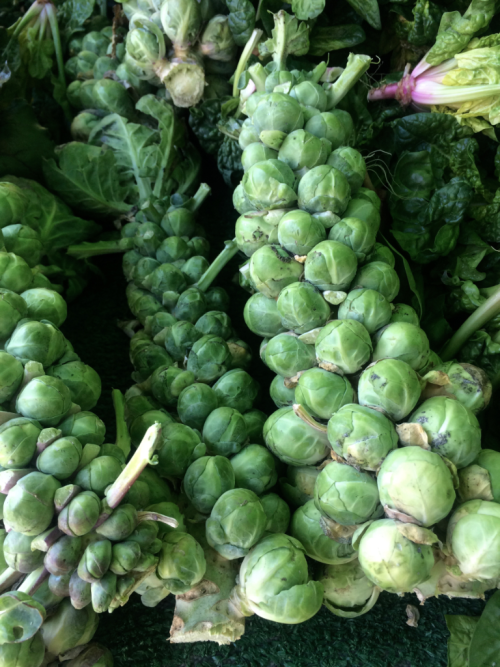 Bags of Brussels sprouts are fun and all, but there's no topping the majesty of the STALK!

I made up the following recipe based on a combination of a few methods for cooking Brussels sprouts I’ve tried, with the added urgency of needing to use up my impulse purchase before it wilted. I liked it so much that I’ve made it several times since then, with some slight variations. If wasn’t until the third time that I realized I’d created a hearty vegetarian meal; it wasn’t until the FOURTH time that I realized I’d created a hearty VEGAN meal. How the hell did that happen?

I won’t waste my figurative breath trying to convince you that Brussels sprouts are delicious and if you hate them it’s because you’ve never had them cooked properly. Suffice it to say, that’s probably the case, but hey, it's a bold taste; if you don’t like ‘em but are feeling adventurous, maybe this recipe will hold the key, and maybe it won’t.  But it’s really great and you should try it.

You’ll notice that I have lots of approximations and substitution suggestions. The only thing that’s pretty hard-and-fast about this recipe is the preparation of the sprouts themselves, seasoning aside. Poorly prepared Brussels sprouts will make you feel like the pitiful child in a movie flashback to someone’s grim 1950s childhood. Trust me on that.

Rinse the sprouts and put them, along with a half cup of water and the salt, into a pot with lid. Cook, covered, over medium heat for about eight minutes, until tender but still bright green. Drain.

When the cooked sprouts are cool enough to handle, cut them in half  lengthwise. If the knife doesn’t cut all the way through the sprout, this is actually great news – we’re going to be putting all of these sprouts cut-side down into a pan, and butterflied sprouts means fewer things to transfer from cutting board to pan.

While you’re prepping the sprouts, put the water for your pasta on to boil. 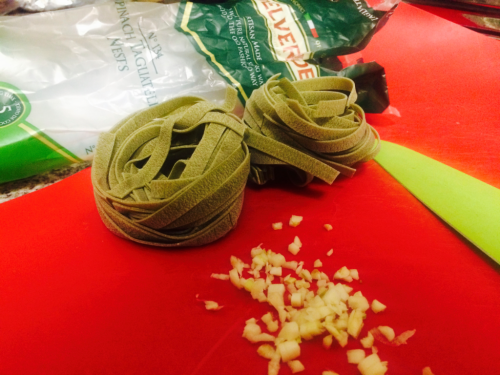 Turn your halved sprouts cut-side up and give em a healthy grinding of lemon pepper. Sprinkle on a bit more salt if you like, but keep in mind that the sprouts are already salty from the parboiling in salted water.

Pour the olive oil into your widest pan. Add the sprouts, cut-side down.You should have a little field of green bumps in front of you. It will be kind of cute, actually. Put any thoughts of cuteness aside, however. You’ve got to eat these things in a few minutes.

Fry the sprouts and garlic over medium high heat. Don’t stir. This might be a good time to add your pasta to your pasta water if you haven’t already done so.

Let the sprouts cook until the cut sides are brown and a bit crispy. Check after 5 minutes. It will be tempting to take them out of the pan and eat them as soon as they are even slightly brown, but if you can be patient, let them go 2-3 minutes past this point and you will be rewarded with some real crispy deliciousness on the edges. 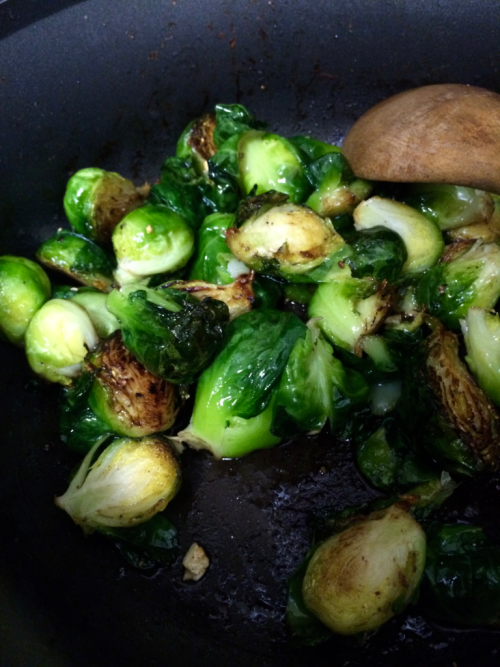 These could definitely be browner, but I couldn't wait!!

When the pasta has finished cooking, drain and add to sprouts mixture. Turn off heat and toss. to coat noodles in some of the remaining oil. Dish onto plates and serve.

If you don’t care about the vegan-icity of the dish, top it with some freshly-grated parmesan. 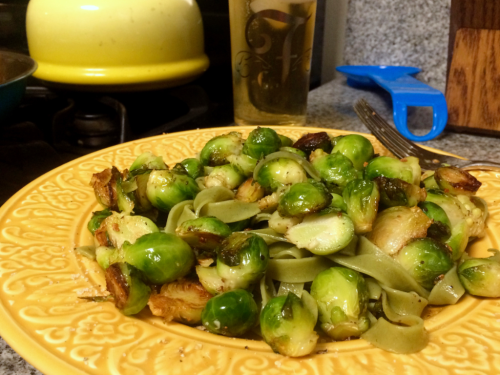 Other things to consider adding:

Making this dish for dinner never fails to make me feel really proud of myself. It's not difficult, but it is delicious, a little fancy, and chock-full of the quintessential "eat-your-vegetables" vegetable, transformed into something craveable. And I would never use a magazine headline buzz-word like "craveable" lightly. Bon appétit!

Posted at 03:59 PM in California | Permalink