« I won the BFF lottery with @dcphotog 👯😍 | Main | I was so excited that this great Chicago coffee spot now has a Beverly Hills location that I went back again less than 24 hrs after my first visit. The same baristas were there, greeted me and remembered my order. Sorry, S. Bev Starbucks! »

I originally wrote the following post way back in 2009, on the occasion of Barbie's 50th anniversary. I'm reposting it now in...you know, I'm gong go ahead and call it celebration of the new, more realistic, way more beautiful line up of dolls Barbie just announced. My first thought on seeing photos of these new dolls was "these aren't real, are they?" And, upon realizing, to my delight, that they WERE real, my next thought was that my mom would have been flabbergasted, in the best way, to see this day. And I'm not join to hide it: I really, really want to collect them all. 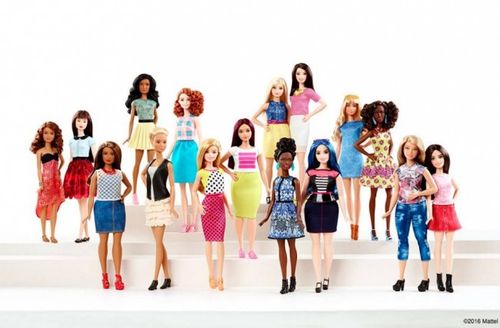 Barbie, that plastic minx, is 50, and I'm celebrating with my Official Barbie Story. It is a story of profound reverse-psychology, the only blotch on the otherwise stainless parenting record of Mr. and Mrs. Don R. Flaxbart.

My dear mother, God rest her feminist soul, hated, HATED Barbie and her stupid proposterous physique, her cheerleader-preppiness. So, as a child, I was given a rule: if I wanted a Barbie, I would have to buy it myself.  My parents both had brothers and sisters, so neither was quite prepared for their only-child daughter's doll obsession; I had one in the worst way. I was a six-year-old mother to seven cotton children, I created tiny universes with my playmobil people, and Barbie...Well, she was just so tantalizingly cheap! For a week or two of saved-up allowance, I could own a doll that was totally my own. And I would treasure it.

And so, over the course of about ten years, I built up a portfolio of Barbie dolls, complete with brushed hair and attached heads (ripping the heads off of dolls or giving them awful haircuts was apparently a common practice among my peers). As a young child, there was nothing else that I was required to buy for myself if I wanted it, making my Barbies (and some other over-the-top dolls I saved up for) the only possessions that were truly mine. So this was no mere collection; this was a soap-opera of interconnected families, the Jensens, the Ratners, the fledgling Williams family waiting for a father to join them from "out of town."

It all started with a matriarch. Barbie was her name, uncreatively, and she was a rock 'n' roll Barbie by birth. I have no idea where she came from, but I couldn't have been over 4 when I got her, and to this day, she remains in my posession.  She had special hip-shaking action, which allowed/forced her to move her arms back and forth, karate-chop style, when you twisted her torso.

By the time I was 10, this twisting created a creaking noise that I jokingly referred to as "arthritis" when introducing her to others, human and doll alike. At that point, I'd already formed the basis of an extended family tree that I would have a hard time abandoning if I tried playing with my dolls today. There were the Jensens, Barbie and Ken's family, a popular but slightly trashy clan with two blonde daughters and a hunky jock son, Kevin. There were the Walshes, named for daughter Brenda, a 90210-Mattel crossover. This was my star family, with the beautiful Rosa at the helm; my favorite doll, Courtney, had shiny brown hair like her sisters, and was very serious with boyfriend Kevin Jensen. If you're surprised how well I remember it all, so am I; I suppose it's a testament to how much time I spent creating and living in this tiny world.

I do so wish that I had photos of Loren Ratner (a stylish aerobic instructor) or the look-alike eldest Walsh sisters (two identical 90210 dolls modeled after Shannen Dougherty, one of whom was missing a leg on account of my cocker spaniel puppy). I could present to you my formal list of names and connections, or my huge collection of matchless tiny plastic shoes. You would marvel at the ingenuity of my bedroom backdrops made from cardstock and pictures from bedding catalogs. Perhaps you would truly comprehend the breadth of my polyvinyl planet.

I don't have those things with me at the moment. 4 years ago, my father sold the house I grew up in, and I had to search through all of my belongings, deciding what to keep and what to throw away. It was pretty ugly.

Don't panic. My carefully manicured collection definitely made the cut, much to the confusion of the rest of my family. For now, they live in a giant RubberMaid container in a cousin's garage.  There they sit - Barbie, Ken, Skipper, Kevin, Courtney, Stacey, Janet, Shannen, Brenda, Brandon, Luke -the list goes on- waiting for the day I can bestow their storyline on children of my own.

On second thought, maybe I'll keep them too myself. I wouldn't want their heads to get ripped off.