« Team Name: Sanderson Sisters Team Objective: Know the most answers; have the most fun | Main | Conversation Between Me, Two Robots, and a Human: An Approximate Transcript » 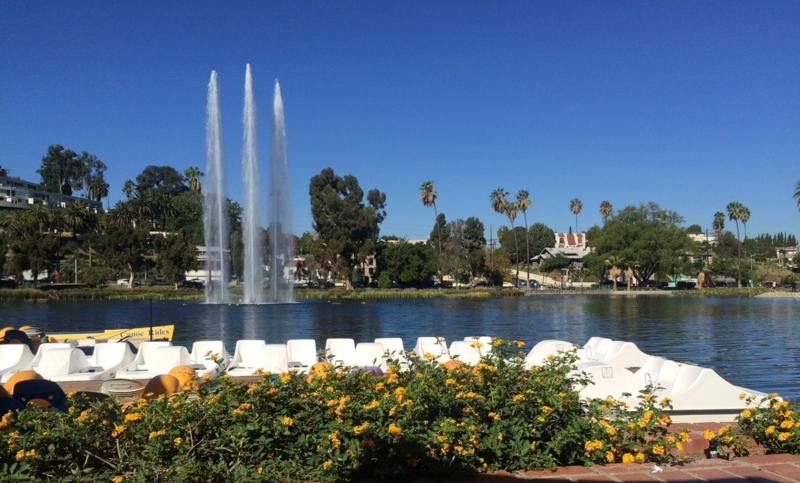 I'm sitting in Echo Park (the neighborhood, yes, but specifically the park proper), drinking an overpriced but delicious coffee drink. Two shots of the darkly fruity, locally roasted type of espresso that is so easily found in this town, along with some maple syrup that might be organic but can't possibly be "local" because when was the last time I saw a maple tree in Southern California? It's iced, which means I'm drinking it too fast; the sun is hot and the drink is too refreshing to savor.

This park is, in my opinion, one of LA's most resplendent gems. Its celebrity is of the same genus as so many of the town's celebrities: you may not have heard of it but you might recognize it from one of its television appearances. It was featured but uncredited in the recently aired pilot of John Stamos vehicle Grandfathered, for example. I've been here many times before – I've speedwalked the circuit around Echo Park Lake with my walk-obsessed father, had a lakeside picnic with my cousin, and trudged morosely over the park's bridge with a friend who was about to move away, attempting to allow the place's natural beauty to dull the pain of our parting. On all of those occasions, the park was crowded with people – children and vendors, fishermen and paddle boaters, dog walkers and joggers – but this morning is relatively quiet. Even the ducks seem to have slept in.

Admittedly, I was not planning to be at the park today either. I'm here waiting for my car, all four tires of which are currently being replaced about a quarter mile down Sunset from here. When I handed over my keys, it was the tire man who suggested I wait out my service time in Echo Park. "A lot of people like to walk to the park," he told me as I wrote down my phone number. This unsolicited but welcome suggestion is the kind of thing I have come to really appreciate about Los Angeles life. There are a number of regional pet complaints that get thrown around by locals and visitors alike, but those of use who have chosen to reside here and therefore live with these pitfalls of angeleno-dom tend to be eager to share our tips for so doing with our fellow citizens. Advice on what surface street to take to Beverly Hills, what LAX terminal is best for meeting your ride, or what time of day the lines at that new ice cream shop are shortest are as much a part of a typical day in LA as traffic on the 101. There is a weird kind of neighborliness to this causal counseling, a spirit of "we're all in this together" that you'll miss if you're not paying attention.

Behind me, I hear a low wolfwhistle and don't turn around. The whistler could be hooting at anyone, and I'm just minding my own business, staring out at the water, my rapidly depleting coffee drink in hand. The couple next to me ignore him too, until they notice he's actually attempting to signal everyone in the general vicinity. The man, an aging fellow in a maroon bowling shirt, is walking his dog. "Is that your car?" he says to the couple, loud enough that he's asking everyone around as well. "You're about to get a ticket." The couple say no, it's not their car, and I shake my head too. But I also think to myself, isn't that nice. Strangers looking out for strangers. And I hope the car's owner is near enough, and paying enough attention, to appreciate it.

Posted at 10:58 AM in California, City, Moments, Writing | Permalink