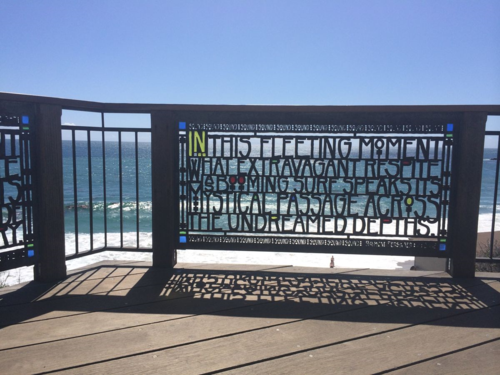 This morning, I woke up nostalgic. Even before the alarm went off, I was entertaining hazy thoughts of what my life is like now, aimlessly reminiscing about the two long-short school years that have passed since I came to California for the screenwriting MFA program from which I'm about to graduate.

Maybe it's a kind of mourning, this nostalgia. Not that I'm sad. In fact, though graduation is just a few days away, though my friends are already starting to trek closer to the heart of LA (I'll join them in a few months), though I'm done with classes and that alarm this morning went off only to alert me that another morning was at risk of slipping away, I don't feel much of anything about graduating. I'm surprised by my relative serenity, since I'm used to having rather strong emotions, particularly when it comes to change. So why am I so calm?

If I had to guess – and I do, I must – I'd say it has something to do with the difference between pre- and post- grad school/California move Marissa. Before I headed west, my life was pretty good. I lived in a swanky part of town (yes, with my dad, but he's great) and knew a huge number of very cool people. For nearly five years, I had a job that was, by all accounts, pretty neat; I got to talk about software all day, plan events, meet celebrities, play with mixing boards, be on conference calls. When I quit that job, it was for art; I finished a documentary I'd shot myself, and got to show it to nearly 1000 people. There were stories in the paper.

I helped start a now-thriving not-for profit that allowed me to host a stand-up open mic, and I once got paid $7 and a beer to tell jokes about Dracula. I went on to work for the world's greatest orchestra, and I sang in one of the best choirs in Chicago. I covered the Chicago Auto Show as press – twice – and got to take a trip to New York to talk about Sweet Valley with a publishing house.

It was a lot of good stuff. But it wasn't a calling. I was wandering, living my life in anecdotes rather than finding my story.

That was pre-California. Now that I'm here, I have little more than sunshine, traffic, school friends, and writing. Not that I'm complaining. It's a good, solid start. I'll have anecdotes here, too, highlights and lowlights will emerge. But it's that last item on the list – the writing – that makes post-move Marissa so different. In Chicago, writing was a hobby. Even when life was fun, I panicked. One worry was constantly humming above the rest: "What are you doing with your life?" I would chip away at the worry with a creative endeavor here or there, but it never amounted to much, and I was never able to allow it to define me.

Then, I decided to take the plunge. When I decided to come to grad school in the LA area, it was largely because this is where "the business" is; I knew that it meant I'd be putting myself in a place where stories are traded as a commodity. But I didn't know that committing myself to two years of writing would change how I see myself, if only because we define ourselves through action, and I have found an action and a definition that makes me satisfied. (If that sounds grandiose, rest assured, I'm not saying I'm a great writer, just that I love it; but even this statement supports my point, as I've learned in grad school that being unsatisfied with one's own work is the most writerly trait of them all.)

It was only days after arriving in California that I was overcome by a strange realization: All those years of being alive, all those experiences, those were my invaluable ammunition! Everything I'd done or was afraid to do; all my emotions and the emotions I observed; every person I talked to; they can all be repurposed or called upon for the purposes of fiction! (Do I know you? I may have co-opted you, however indirectly. Sorry. Occupational hazard.) It took me a bit longer to realize that leaving my fun-filled but somehow unfulfilling life behind to pursue a path that felt like a calling had given me a new freedom. Instead of worries, my brain was free to fill up with stories.

But I don't spend any energy on the worry that used to dominate me: "What am I doing with my life?" It's a luxury that, to employ a cliche, "following my dreams" has bought me. And more and more, I realize that all the time I spent feeling rudderless in Chicago – time that, on my worst days, I'm tempted to think of as "lost years" – has bought me my current peace of mind as well, not because it filled my brain with stories to tell, but because it allowed me to discover what it was I wanted from my life.

I don't know what's next for me – at least, not the specifics. But I know, whatever it is, I'll be doing it here – in the sun, in the gridlock, in the place where stories are sold. It's a strange business, but it's mine now.