I have a feeling I'm going to be writing a lot of these. Enjoy.

Looking at Kendra
"Playboy Reality Star"
All I can think is:

She's not that sexy.
But maybe that's just because
I have heard her voice.

Marissa's Tips for Living the Dream #9: Feel Like a Drug Dealer Without Breaking the Law

If you want to experience the fun and metrics of being a drug dealer, but don't want to sell, handle, or see any illicit drugs, boy have I got a tip for you tonight! Instead of using an fancy store-bought pill splitter to split your prescription medications, break out a sharp paring knife and start sawing away in the kitchen. With any luck, your pills will break unevenly, leaving you with a powdery mess to sweep into your hand or lick off the counter. 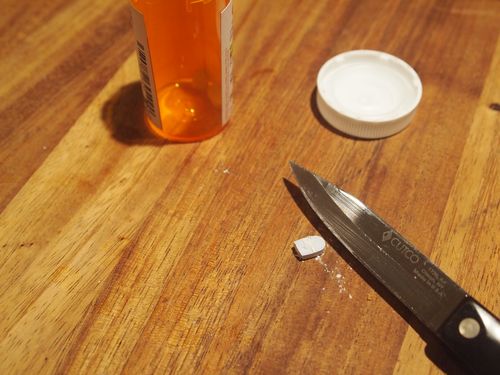 Unlike on normal TV, where commercials for cars and beer are (thank God this is over) political campaigns are essentially waiting-room muzak keeping you from your appointment with entertainment, kids' television programming pales in comparison to the often eye-opening and bizarre commercials. I don't watch a lot of Nickelodeon these days, but if I decide to watch a few minutes of SpongeBob, even his wacky antics can't amuse me like a commercial for toy hamsters on wheels wearing ninja costumes, or the fact that kids still want a doll whose diapers they can change. (You probably shouldn't click on that link. It's pretty creepy.)

Then there are the jingles. How does the song advertising Mermaid Barbie go again? Oh, that's right: "Barbie in a mermaid ta-a-a-ail!" (It's actually "Barbie in a Mermaid Tale," but I saw a doll wearing a mermaid's tail, so I feel strongly that it works both ways.) Sweet and to the point. And after only a couple of viewings, even I can sing along with the Pillow Pets jingle: "It's a pillow. It's a pet. It's a Pillow PET!"

Granted, the poor parents of young children that have to see these commercials several times a day are probably dying for a nice, bone-dry Infiniti commercial with some classical music in the background, or a Michelob ad that maintains that rollerbladers only drink ultra-lite beer. But for now, I'm sticking with the kids when it's time for a word from our sponsors.

Watch at your own risk:

For the past two days, I've been sick, in pain, and kind of crazy. Enter Tylenol PM. Sleeping isn't usually something I need help with, and neither is dreaming strange, vivid dreams, but last night I got some help with both.

I remember two main dreams: the first was about showchoir. This in itself is no shock, as I've been working hard at finishing a documentary about showchoir to begin submitting to film festivals starting later this month. Only in my dream, I was in the showchoir, and we were performing at a large outdoor arena, and after doing the first few songs, I lost couldn't remember what happened next. We did a lanky bouncing move for several seconds and then my memory of events was gone. Even in the dream, I kept asking people what had happened next in the show. Did we finish? Did it go okay? Did I pass out or something? I got mixed reviews from my peers, including some fans who had been in the audience wearing elaborate costumes that corresponded somehow to our show. Then someone brought me my video camera and told me that I'd left it lying in the grass, and some kid's dad had found it for me.

In my second dream, Russell Brand was a serial killer who trusted me with his secret, with an unspoken assumption that he'd kill me if I ever crossed him. He'd go up to people's houses, knock on their doors, and then he'd take them out. Once I ran up to warn some people he was coming by knocking first, but he caught me and was particularly brutal with those people. Then we walked back to the parking lot and he was ready to make his escape in two beautiful cars that were full of people who got out to congratulate Russell before he drove off. I was hoping to shake him so I could contact the police, and I tried to nonchalantly ask him if he was expecting me to go with him in one of the cars. He wanted to drop me off at a theater nearby his next performance spot (yes, he was doing comedy shows throughout this killing spree). When I got home after being dropped off, though, I somehow forgot to call the cops.

In the process of writing down these crazy dream memories, I've actually remembered several other dreams from last night, like the one where I was late getting to the choir loft at church and had to hide behind a pew so that I wouldn't get in the way of the long, slow procession. Or the one where I was at the home of some family I knew in the dream but not in real life. The house was so full of giant dogs that it was difficult to enter a room and keep the dogs from getting in too. Some old dude barged in and demanded that my friend connect his computer to the wifi network. There was a little girl who sat on my lap and told me she didn't like bunnies. But she liked dogs.

The worst part about recounting dream stories is that it's nearly impossible to set the scene properly, and no matter how well you do it, you'll always be telling a story about something that didn't happen.

The End is NOT Near

In today's installment of the New Yorker cartoon newsletter that Bob Mankoff sends out, he talked a bit about the political scene. As there's rarely a candidate willing to support my staunchly hippie-esque love, nature, and pacificity stance, I feel this cartoon pretty much sums up my personal feeling on politics in general:

Also, not to get too uppity or anything, I feel like sharing some prudent analogies from my friend Kevin's Facebook status, which I hope he doesn't mind:

Let me ask you this: If your hands are cold, would you pour boiling water on them to warm them up? Then, once they are burning, dip them in liquid nitrogen to cool them off? Seems stupid, yet we do it with politics all the time. Minor corrections will keep a car on the road, going full lock to full lock will not.

Kevin is a restaurant owner and an a car aficionado, which may shed some light on his choice of metaphors. Good work, Kevin.