Apparently, all that Italian was good for my English.

Okay, this is apropos of nothing, and I should be writing about my trip to New Mexico or the gross coffee drink I just consumed. But I just came across a paragraph I wrote when I was in Italy (Rome, specificamente) and I am so impressed with 21-year-old me that I have to post it. I'll even throw in a bonus picture of St. Francis of Assisi's tomb church, where he is buried, robed in thick, thick fog.

In Rome, St. Peter is supposedly the focus of attention. Peter, the rock on which the Christian church would be founded, had a devotion to Jesus so strong that he could never seem to find the words to express it, but even he denied knowing Jesus after Jesus was arrested and taken to Pilate. Here, in the capital of Christendom, is it possible that the same thing occurred? Were the popes of Rome’s past guilty, too, of denying Jesus? – not through their words, certainly, but perhaps through their actions. This thought never occurred to me as such until Saturday, when a combination of two things happened: I visited Assisi, and I read Lorenzo Valla’s thoughts on the donation of Constantine.

Upon reading this, I had two thoughts simulataneously. (1) "Did I write that?" (2) "I read Lorenzo Valla's thoughts on the donation of Constantine?"

I have a feeling he thought they were bad news. Constantine was not history's most forthright guy. At least I remember that. Any way, here's your picture! 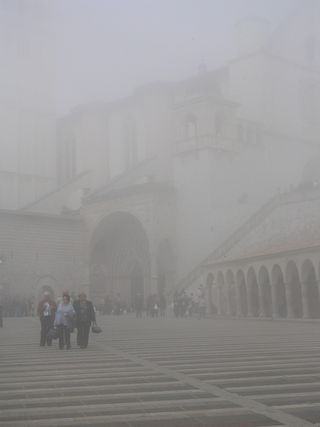 Posted at 11:04 AM in Religion, Travel | Permalink