American Idol: Yeah, I watch it. 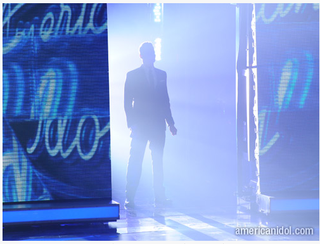 That time of year has arrived. The chaff has been cast off, and only sort-of-okay singers are left. It's time to start watching American Idol.

It's a bittersweet moment, as I both love AI and am unable to shake my embarrassment at that fact. Tonight, the top nine contestants will perform, and they probably won't be that great, and I will eat it up. Tomorrow or the next night, I'll overhear some middle-aged women or gay men discussing the best and worst performances, and I will be both proud and guilty to know what they're talking about. I'll suppress my urge to jump into the conversation only to make my dad listen to me talk about how my favorite contestant (not sure who it is yet...Andrew? Casey? Crystal? Lee?) beat the hell out of a Michael Jackson song.

Come to think of it, I can probably get my dad to watch with me. Last season, the amazing spectacle that was Adam Lambert (and Allison Iraheta's sexy rock voice) made the show impossible to ignore for both of us. And EW reports that, oddly enough, Lambert will be the "mentor" on next week's program. If he can teach these kids some of his moves, maybe things will get exciting enough that I'll feel comfortable wearing my Idol-fan badge in public.