Yesterday I stared at a robin for about 5 minutes, today it's 70 degrees out and too hot for this sweater I'm wearing, children in bright clothes are everywhere, and to top it all off:

Oh crushing weight of winter, you are no longer a burden to me! Callooh! Callay! 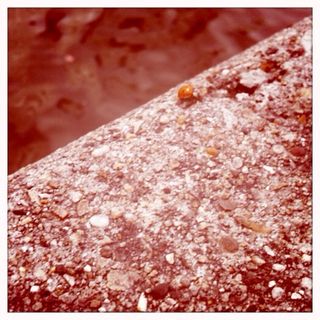 I thought it would be hard to write a review of the complex French film Un Prophète (A Prophet), but once I got started I couldn't stop thinking of things to say.

Perhaps I shouldn't be shocked that I just saw my favorite Mad Men character in a Trix commercial; after all, she's in their key demographic. But Sally Draper, aka young actress Kiernan Shipka, hasn't ventured far from the kitchen table. Take a look at that second screen shot and you'll see what I mean: that face is classic Sally. 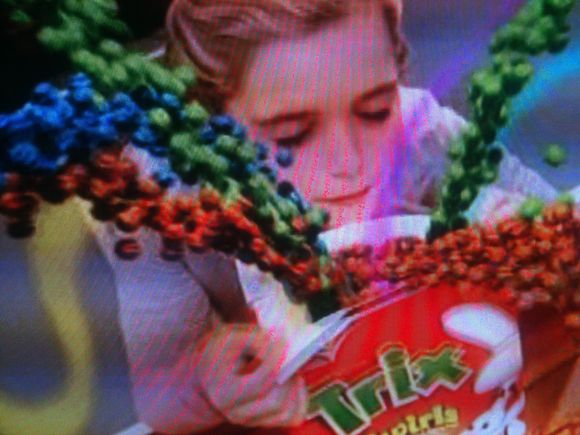 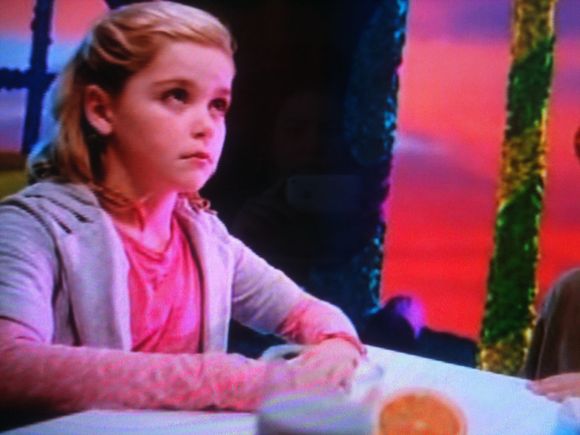 In the details: sexy old table

This makeshift buffet table (at Chicago restaurant Elate) is so cool it makes me wanna pee my pants. Luckily, it's right next to the bathroom :) 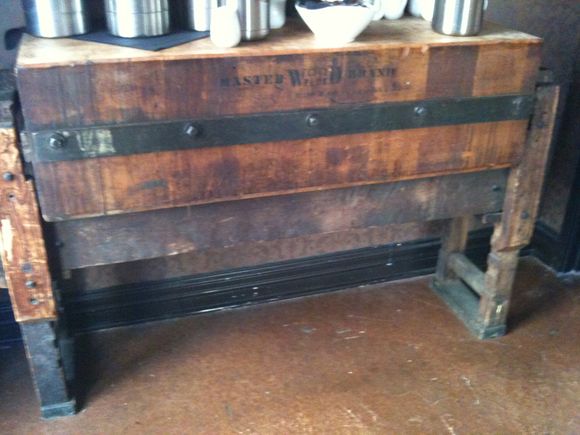 EVEN MORE on Sweet Valley Diaries

So, I'm devoting much more time and energy than ever before to Sweet Valley Diaries these days, and the result is kind of cool…for the first time ever, I've split a book's main plot and what I always refer to as "The B Story" into two separate entries. I wouldn't do that just for fun; it just so happens that Book 35 devoted pretty much equal time to the "serious" A Story and the "totally ridiculous" B Story. It's about Tofu-based toiletries.

New on Galsguide.com: a bit about ChevyMissions and doing good with social media

I hope you'll check out my latest post (and video!) on Gals' Guide, all about this new GM Charity program called "Chevy Missions." or, just start thinking about how YOU might use social media for the greater good.

New on Sweet Valley Diaries! Sweet Valley High Book #35, Out of Control, or The Furious Case of Aaron Dallas.

Thus begins a week-long series of Diaries posts, wherein I champion book donators, set forth my plans for the future, and devote an entire entry to the prominent B-Story of Book 35.

Damnation of Faust Review on BC; Premiere Chicago Production

Every so often, I write a review or commentary for Blogcritics. Yesterday, I slaved away on a review of the opera I'd just seen at Lyric here in Chicago, the Berlioz work Damnation of Faust. I was so proud of it. It was lovely. But what to do with it? It was definitely aimed at people interested in opera. It needed an appropriate home.

Thank goodness for BC. It's housed several of my theater reviews, as has the Chicago section of GalsGuide. I'm not sure how many people go there specifically to read the Culture section, but I have a feeling that people do. One of those people could be you. Hope you like it!

I was reading – or, rather, watching – this slideshow feature on GQ's website all about glasses. Web surfing with reckless abandon had gotten me to the article in the first place, so when I saw a pair of amazing Tom Ford men's glasses, I thought I'd surf over to tomford.com and check them out.

Tom Ford's entire eyewear collection makes my mouth water, as did the GQ slideshow about thick-rimmed glasses. You see, I am a sucker for thick (within reason) plastic frames. While Superman had to change into his costume before fighting crime and saving the day, it wasn't until he put those Clark Kent frames back on his chiseled face that I really found him sexy.

The Tom Ford frames that piqued my interest were a pair that looked just like those worn by another, less prolific, superhero: Dan Dreiberg, aka Nite Owl II, from Watchmen, whose nerdy hotness puts Superman to shame, at least in my eyes. The glasses are $380, but…look how pretty!!

Here's how they appeared in the better-lit GQ spread:

My own film-critic alter ego (super-hero name not yet assigned) feels pressed to point out that Tom Ford's work was also represented in the GQ.com article through a shot of Collin Firth from A Single Man (set in the 1960s),  in which Firth dons some smashing black frames. And if I wanted to TOTALLY blow your mind (I do) I'd tell you that Matthew Goode was in both A Single Man (as Jim, whom he played excellently) AND in the film version of Watchmen (as Ozymandias, whom he played as if he didn't speak English that well). Whoa!

Mad Men Barbies. It makes so much sense.

Like most sentient television watchers, I adore Mad Men on AMC. Unlike most of them, I think I might actually like the show even if the scripts and plots weren't so great, because I am obsessed with mid-20th century advertising. It's really an extension of my love of popular culture in general; I think it's fascinating to see what people in other decades saw everytime they opened a magazine or newspaper, and even more fascinating how bizarre the ads seem in retrospect.

You know what else looks weird in retrospect? 1960s Barbie faces. People have been up in arms about how Barbie dolls look forever, but they never looked as alien as they did back in the early days. Realism was never the point – the dolls were meant to be dramatic and beautiful and plastic. It reminds me of something…could it be… the characters on Mad Men?! That's why I think it's so perfect that Mattel and AMC have teamed up to create a collectors' line of Mad Men Barbies. (Read more about my strange love of Barbies here.) The Barbies are gorgeous, with perfectly tailored clothing and (stroke of genius) 60s-era Barbie styling. There are four characters represented in the collection: Don Draper; Betty Draper; Roger Sterling; and "bombshell office manager Joan Holloway." Personally, I think it's a little odd that Mattel describes Joan as a bombshell, but leaves the ridiculous Barbie proportions as is rather than, you know, amping her up a bit. I'm not shocked, but just as January Jones and Christina Hendricks aren't going to swap clothes anytime soon, I don't really think the dolls should be able to, either. But that might be the bitterness talking.

The first commenter on AMC.com's post about the dolls mentioned that he wished Peggy was a part of the set. At first I was in total agreement, but after mulling it over, I think that Peggy's too sweet and honest for this plastic crowd. I know, I know, she's got her secrets too, but she's not Draper-league. Let's leave this collection as it is, with only the snakiest characters represented. Fake pretty dolls representing the fake pretty characters that sell pretty for a living? I love it.

Post Script: That Peggy-missing commenter has his own set of self-made Mad Men Barbies he photographed for Haute Doll magazine. You can check it out for yourself here. Greatness.