I got a KitchenAid Artisan stand mixer for Christmas from my World's Best Dad. He even got it in the Williams-Sonoma exclusive buttery yellow color I wanted. I cried when I opened it.

It's amazing how simple this one device makes the baking process. Mostly it's a time thing (also a little energy): I can start creaming the butter and then measure the sugar while the butter is creaming. I can gradually add the flour without stopping the mixing process and not get flour everywhere. It's just wonderful. (Note to home bakers: when using such a "set-it-and-forget-it" tool, it's important not to actually forget it. There is such a thing as too mixed, and it is bad news).

In packaging and advertising and such, simplicity also appeals to me. One recipe I'd been putting off since Christmas called for Marshmallow Fluff, which I don't really keep around the house. And since they don't sell it at Trader Joe's or Whole Foods (at least not the one near me) I was going to have to get some on a special trip to the "normal" grocery store. Ugh. Then, lo and behold, I spotted some at CVS last Friday. I think I might have purchased it even if I hadn't needed it, again because of the simplicity. It's not a fancy brand, it won't win any design awards, but it called to me: a white plastic (NOT glass! Yay!) container with a red lid and a blue label. Easy to get out the sticky stuff, nice to look at, reusable. Simple. 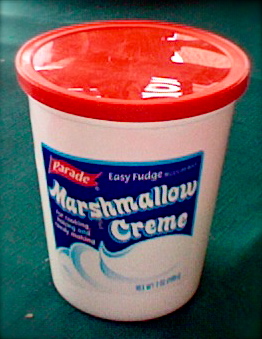 Sometimes simplicity can be bad. For example, I took this picture with the iSight on my computer because it would be simpler than using my phone or my normal camera. Oh well. You get the idea.

Posted at 11:15 AM in Advertising, Baking, Food and Drink | Permalink