Another publisher has released a set of gorgeous books, sold separately of course. Penguin Classics has a bunch of new hardcovers. Rather than dust jackets, these have lovely patterns foil embossed on the covers. They are $20 each. Sure, these books are all in the public domain, and you could read them online for free. But these editions are so...pretty. Publishers looking to combat the rise of the digital reader should take note. 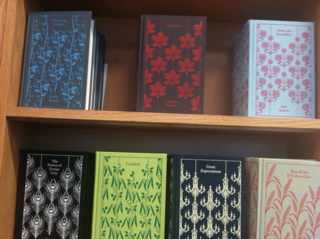 In Chicago, we tend to refer to all non-summer months as "winter." Ignoring the current snap of pleasant weather, we're all presently preparing to be very cold for a very long while. Which means it's time for some soup.

When it comes to soups, there's nothing I love like a cream-based chowder. Furthermore, I like to add corn to pretty much anything. So, on the night of Halloween I was super pleased to find seafood and corn chowder as the soup of the day at D4 in Streeterville. It was delicious. The next afternoon, I was a little surprised to be facing a huge pot of crab and corn chowder at the SoupBox on Chicago Ave., as I'd never seen that soup there before, but I went ahead and had some.

Here's where things get weird. Less than a week later (this past Friday, to be precise), I found myself unexpectedly at Puck's Express, the to-go food station at the MCA. I had the soup of the day. It was seafood and corn chowder. This one had potatoes and celery in it, and it was the best yet.

I had already decided to write this little blog post about my newly-discovered food trend when my father took me to dinner at Heaven on Seven that evening. God's honest truth: seafood and corn chowder was the soup du jour. I had to have a cup. It was fine, but not as good as the one I'd had for lunch.

I'm not sure what's stranger: that, in one week, I was served a soup I'd never even heard of before on four different occasions, or that each of these places was serving this soup as the special, limited-time-only soup on the day I happened to be there. For all I know, Jesus is trying to give me mercury poisoning. You may never come across this food trend at all.

In truth, I doubt this was a fluke occurrence but I've taken the liberty of finding a recipe for seafood and corn chowder, because missing out on such a lovely soup would truly be a tragedy. I ate it four times in a week, and if you offered me a bowl of it right now, I would gladly eat it. That's how good it is. I looked for a recipe that seemed similar to the one I had at Puck's, since that was my favorite. Further increasing the coincidence factor, this recipe is from a Chicago cook and was written on November 8th of 2007, precisely 2 years ago today. I'll try cooking it up soon (I'd recommend adding some chopped celery) and let you know how it goes; feel free to do the same!

Cook the bacon in a large pot or Dutch oven over medium-low heat. Transfer to a paper towel, leaving about one tablespoon of fat in the pot. Add the onion and jalapeno, season with salt and pepper and cook for 5 minutes, or until soft and lightly browned. Add the garlic, thyme and marjoram and cook for 1 minute. Sprinkle the flour over the onion mixture and cook for about 2 minutes, stirring well to combine. Add the chicken broth and milk. Raise the heat to high and cover until the liquid comes to a boil. Add the potatoes and return to boiling. Lower the heat and simmer, covered, for 10 minutes or until potatoes are just tender.

Add the corn, chili powder. Return chowder to a simmer and stir in the cornstarch mixture. Add the shrimp and scallops and simmer for 2 to 3 minutes, or until seafood is opaque and cooked through. Stir in the reserved bacon. Serve garnished with fresh parsley.

One Year Later: My Initial Reflections on Election Night

It's the anniversary of last year's huge election. I know a lot of people are frustrated about what's happening and what's not happening, but I hope these thoughts, written a year ago today, helps to put things in perspective a little bit.

The stately older woman next to me sighed audibly and turned around to complain to my father and me. "What is that? Who are they talking to?" Fed up with something she called "American foolishness," she winced as Anderson Cooper talked electoral college with a hologram of Will.i.am of the Black Eyed Peas.

We were staring at one of many jumbotrons in a sea of humanity near Grant Park. Chicagoans were out in the hundreds of thousands, all eyes on us as we stood downtown. The mood was one of cautious confidence but, as a group, we still had some butterflies. Sure, Obama was Chicago's candidate, but would our fellow Americans ("foolishly," the woman next to me might have observed) manage to ruin our celebration? Will.i.am wasn't going to be able to tell us which way Indiana or Florida was sending their electoral votes.

The early math pointed to an Obama victory as long as the West Coast went blue as predicted. As the pivotal poll-closing hour (10pm central) neared, CNN began a countdown that would ultimately announce our new president. We counted the seconds aloud as if it were New Year's Eve.

And then, instead of a sigh of relief, we let out a collective scream. My father stood behind me and shouted, more excited than I've ever seen him. But the woman next to me remained silent. I caught her eye and she said to me through incredulous tears, "My grandfather could not vote." How bizarre to think that as recently as 1870 that the 15th amendment gave African Americans the right to vote for the first time. For many in the crowd, our collective ability to change our nation had suddenly become abundantly clear.

As we waited for President Elect Obama to take the stage, we watched McCain's concession speech together, we sang the national anthem together, we anxiously watched the stage (as shown on the jumbotron) for some signs of movement. Not long before our guest of honor took the stage, my father smiled brightly. By this time, he addressed everyone around us when he observed how lucky we were to live in Chicago.  It is not ironically that I invoke now first-lady Michelle Obama when I say that for the first time in a long while, I feel lucky to live in America.

I've been sick for the past week. At this point, I'm down to an icky, phlgemy cough and a dehydration problem, but last week was brutal. I consulted the internet to try and determine if I had a severe cold or the flu, only to discover that the line between cold and flu is dotted and constantly in motion, like marquee lights, only so very thin as to be nearly invisible.

I decided I probably had the flu. Despite the fact that I got a flu shot, or possibly because of it – I think I may have had a mild bug when I got the injection — flu seemed to be the best bet. My father was extremely concerned. If I had the flu, could I have the swine flu? If I had swine flu, what was stopping pneumonia from coming in and relieving me of my lung function? I needed to see the doctor. He was sure of it.

Yesterday, a week after the illness really hit me, I finally snagged a doctor's appointment by marching into the guy's office and saying the magic words: "I think I have the flu." I was instructed to wait a few minutes. Sure enough, less than 5 minutes later, I was taken into a private corridor and told that the doctor would see me, but that first I would need to put this on: 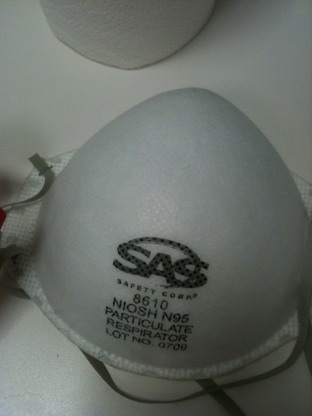 In the time it took me to say "thank you" and "I understand," I was asked several more times to put the mask on.

I felt kind of comfy in my mask, to be honest. I didn't have to worry about any strangers talking to me. I didn't have to cover my mouth when I coughed. It was kind of warm. I wore the mask for another 30 minutes or so before finally seeing the doctor. Much to my surprise, he was also wearing a mask. They were really serious! I was able to remove my mask long enough for him to check my ears (fluid filled), throat (red), and temperature (by this point it was back to normal), though I kept it on while he listened to my lungs. Was I coughing anything up? Yes, I said. What was I coughing up? I have no idea, I said. I haven't been looking at it.

The doctor's verdict was that I had "the flu or some flu-like virus." So, did he do a blood test? Did he put me on antibiotics? No. He told me to take Sudafed. Maybe some Mucinex ("it's safe, because it's basically nothing") but NOT NyQuil or Robitussin DM (the only thing I had been taking) because it interacts with one of my other meds. I was free to go, but not before making sure I hand-sanitized myself and put my mask back on. I actually asked about the latter point, as was told I should leave it on until I left the building.

I have been sick many times in my life, and I have been given a lot of different prescriptions, both over the counter and Rx only. This was the first time, however, that I was handed a mask to keep my germs in, or confronted by a similarly masked doctor. Keeping people healthy is important, perhaps doubly so in a doctor's office, but all this felt like a lot of dramatic quarantining for something that doesn't even warrant antibiotics. But hey, I'm no doctor. And now I have a lovely, high-quality, only-slightly-tainted new dusting mask.