Even the can looks disgusting, and it's aimed at WoW gamers, but I just had to buy this can of soda. Why? Because I have a serious problem. I simply cannot ignore new flavors of existing junk foods (remember the Peppercorn Ranch Sun Chips?). It's especially odd considering I don't consume the regular flavors junk food with any regularity (if you see me drinking normal green Mountain Dew, rest assured I had a dramatic inner conflict about it a few moments earlier).

I'll let you know how this "Fuel" tastes when the sugar high from my Reese's Dark cup fades. I am, sadly, not joking. :) 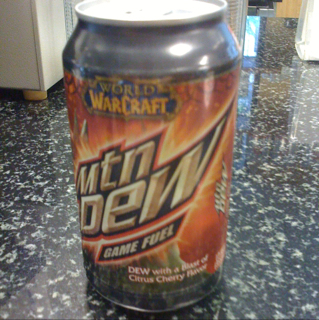 Okay. This stuff is orange. Why is "Dew with a Burst of Citrus Cherry Flavor" orange? I have no clue. It is also pretty drinkable, but not as tasty as Mountain Dew Code Red, which, to my knowledge, is essentially Dew with citrus cherry flavor. But red.

"Game Fuel" is unclear about whether it's actually got any kind of energy-blasting ingredients (other than the standard caffeine) but it tastes like a cross between Code Red and Monster Energy Drink - ie, a bit of that sort of chemical, vaguely-vitamin-y taste that you find in an energy drink, but not too much.

The worst thing about Game Fuel is that it is impossible even to look at the can without thinking of that South Park episode in which the boys spend all their time playing World of Warcraft and ultimately end up victorious, but also extremely fat and blemish-covered. But, hey, maybe that's the demo Pepsico was going for with this one. 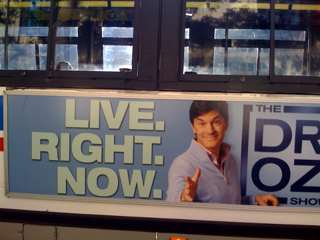 OMG, advertising execs, STOP IT with the extraneous periods! It's not even makng sense anymore! Most of the time, a verb and an implied subject is the bare minimum needed to create a one-word sentence. If you're trying to create emphasis, CAPS LOCK IS ENOUGH! And maybe an exclamation point. ;) When I see extraneous period like the ones shown here, I can't help but try and parse what those individual sentences mean. Best I can tell, Dr. Oz and his show are either Republicans that are airing a love tv show at this very instant, or they're having a curt phone conversation with you about whether or not you're interested in watching. Or both. I'll keep you posted. On more extraneous period sightings that is. I won't be watching the show.