There are a lot of holes in our collective memory when we think back on great moments in popular culture. When I told friends about how I met and spoke with Harriet Miers and her family last month, most of them had totally forgotten who she was. I still can't remember the name of that weird cartoon with the alligator named Jolene. In 5 to 10 years, my dad won't be the only person who doesn't know who Kate Gosselin is.

I have a special place in my heart for one particular show that most of the world seems to have forgotten – or never heard about at all: Sifl N Olly. I loved this show when it was really on TV, and I still love it today. We have to rely on YouTube for most record of the show, as MTV/Viacom has never released the astonishingly bizarre and hilarious sock puppet "talk show" on DVD. Creators Matt Crocco and Liam Lynch did release an unaired third season of the show several years ago. It's wonderful.


If you don't find strange things funny, you might as well stop reading now. Otherwise, do yourself a favor and click play.

No, I haven't forgotten my pledge to post daily. But I really wanted this post, written on Wednesday, to get onto GalsGuide before I placed it here. Oh imaginary readership, why must you berate me so?

Note to self: install widget on website to determine whether or not readership is actually imaginary.
At any rate, here's the post. Enjoy! 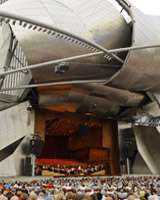 was kicked off in style tonight at Opening Night of the 75th Annual Grant Park Music Festival (which is now held in Millenium Park due to the incomprable grandiosity of Pritzker Pavilion verson the Petrillo Music Shell).

I could go on about how moved I was by tonight's performance of Tchaikovsy's Piano Concerto No. 1 and Mussorgsky's Pictures At an Exhibition, but I'd rather just recommend that you check out the festival's website ASAP and get yourself to one or more shows this summer. Not a classical music fan? This season has mariachi, Brazilian Jazz, Gilbert and Sullivan…and a whole lot of symphonies, both classic and modern.

Most shows start at 6:30 and typically last just 90 minutes, the free seating is on the gorgeous open lawn at Millenium Park, and hey, it's free. What have you got to lose?

Yesterday, I mentioned the story of putting off writing a review until it was essentially a moot point.
Today, I learned that even good intentions aren't enough to make my little daily-posting project succeed. I wrote an entire article about this super-cool TEDtalk and a corresponding New Yorker article, and I planned on posting it both here and on another great site I write for, Gals' Guide. In the name of woking quickly, I composed the entire thing in the typically reliable SquareSpace edit window that site uses (I use TypePad for this blog; my understanding is that SquareSpace is better for sites that have many contributors). I finished the article and switched from "WYSIWYG" to "Raw HTML" to embed the video of the talk...and the page reloaded with all of the post's content totally gone.
Shit.
Well, it's getting late, so I guess I'll try to recompose my thoughts tomorrow. Who knows, maybe the second try will be a bit more elegant. But whatever it ends up looking like, you'd better believe I'm going to compose it on my nice, safe, Time-Machined computer before trying to enter the text online.

Tom Stoppard's Rock 'n' Roll and some thoughts on diligence

Yesterday, I was compelled to post on the possibility of committing to write something here everyday. But the sentiment wasn't fueled by a stray spark of inspiration; it was fueled by a pretty dopey move on my part. In an effort to get some things squared away at last, I diligently devoted some private time to writing a review of this tremendous play I saw a couple weeks ago. I'd been letting my thoughts stew long enough; it was time to let them out.

After finishing my review (below), I moved to post it online, but not before checking the theatre's website to see when the play's run would end. And I found the date in question: June 7. Yesterday.

If I'd actually been diligent about devoting private time to writing, this review would have been written at least a week ago. Sure, that wouldn't have allowed for much stewing, but at least the review would have had a chance to encourage some readers on the subject of whether or not to see the show.
At any rate, I'm still proud of my review. So here it is. Enjoy it if you like – hey, the play might come back to town someday, right?

In my time on this planet, I've been lucky enough to see a great many plays at Chicago's Goodman Theatre. I've a seen musical by Randy Newman, an exotic fable about mysterious princesses, stories about struggling parents and about the burden of Original Sin. The plays are often great, and even those with major failings are at least enjoyable. I was expecting Rock 'n' Roll to be one of those pleasant-but-not-great shows, straining to get a story across from behind the bars of classic rock tunes.

I really should have known better.

Rock 'n' Roll is, without question, the smartest and most philosophically resonant play I've ever seen at the goodman. Perhaps I should have expected this from world-famous playwright Tom Stoppard, but the name threw me off. In the play, rock and roll is used, quite literally, as a kind of protest against the oppression of communist Czechoslovakia. Stoppard avoids oversimplification of this process, however, making the entire show a dialogue on communist theory versus communist practice, with nothng left finalized except by history.

Set in the late sixties through the 1990, many events of the play focus on actual historical events and figures (Václav Havel, The Plastic People of the Universe, Syd Barrett), but to call Rock 'n' Roll a history lesson would be falsely reassuring. The charcters toss around the vernacular of Communist Europe without a pause - Dubček, October Revolution, Prague Spring. This causes a bit of a comprhension curve for younger viewers like myself, who didn't live though the decades the play occupies, and for older viewers who are unwilling to pay close attention. While my father and I came away from the show awed, intrigued, and ready to pour over Stoppard's script, much of the audience was clearly looking for something more accessible. Like me, that was likely what they were expecting. The show's fast pace, heavy subject matter, and collection of accents clearly left many feeling lost. As for me, I left wishing I'd been closer to the stage and eager to soak it all in all over again.

So here's the question: If I say I'm going to post every day, something, anything, every day, will that be commitment enough to actually do it? Throughout this week, I've had passing thoughts that would have made perfectly lovely blog posts here on PopSent.

I met Harriet Miers. She told me I had a pretty name.
I went to a graduation in Dallas where, in a class of almost 500, there was only 1 fat girl.
I played Rock Band for the first time.
I went to an alumni party for my university, where I found about 7 people I knew at all.
I saw a variety of advertisements, both wonderful and frustrating.
Okay, so some of these things are more remarkable than others; no matter. I frequently think in a sort of narrative style, composing my thoughts as if I were preparing them for mass review. Like so many things in life we rarely discuss, I have no idea whether or not this is normal.
Fingers crossed, I will try my best to make PopSent a nightly ritual.
Love,
Marissa