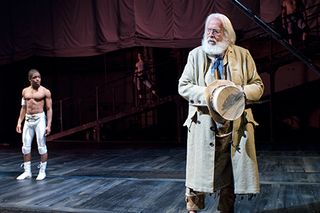 This new review (in the "2 Movies About" Series) was just posted on my film blog, Cineplexus. Enjoy!

Star Trek ★★★★½
In the movie industry, as in so much of retail-based society, seasons start a little early. Christmas season starts at Halloween, Oscar season starts in the Fall, and Summer, the season of the Blockbuster, starts in early May. Summer season 2009 is off to a rollicking start with two hugely anticipated films, each with a very long franchise history to back it up and bring it fans. Wolverine and Star Trek are both examples of mega-budget, sci-fi epics that movie fans love, even those who don't care much about the source material, and they both have already made major bank, thanks in large part to months and months of hype. The films have this in common, and little else.
Actually, for me, there were some other similarities. I saw both films on the day they opened, at the same theater, where in both cases I had to show the ticket I just paid $10.50 for to a diffident but unyielding usher before entering the theater itself, despite the fact that tickets were already torn on an entirely different floor. Oh, summer blockbusters. We get so excited for you, only to be put through hell for the opportunity to be disappointed by you. At least, this was the case with Wolverine.
The X-Men franchise has been quite successful at the box office over the years, but scripts and plot development have seen their ups and downs. Wolverine has all the flash and careful art design of previous films, but in terms of editing and storyline, we can mark it in the "downs" column. Ladies and gentlemen, for the first time in the history of Cineplexus, I'd like to issue a SPOILER ALERT.
Now, perhaps you already know that Wolverine (Hugh Jackman, of course) and his ilk (i.e., mutants) are practically immortal. This is made crystal clear to us in an opening montage that finds James Logan (Wolverine-to-be) and his half-brother (the future Sabertooth, played by Liev Schreiber) fight in pretty much every American War ever (nevermind that they're Canadian). But after some funny business in Vietnam, some fun with other mutants (a hit-or-miss bunch that includes some characters that will be familiar to comic book fans, but not to anyone else), and starting a new life as a lumberjack, a man named Stryker offers to make Logan "indestructible."  X2 already introduced Stryker to us as a military madman, and as Wolverine's creator.
Indestructible. It's not an equicovating kind of word. What's more, the man who uttered it, Stryker, has devoted his life to the study of mutants (and how to take advantage of them). So why, Gavin Hood, why,David Benioff and Skip Woods, why, Nicolas DeToth and Megan Gill, is the entire second half of the movie about Stryker trying to destroy Wolverine? Moments after the newly-minted adamantium-infused Wolverine esapes from the laboratory of his creation, Stryker utters the following words to his #2 man: "Blow his brains out." You JUST coated his skull in unbreakable metal, jackass! Sure, a military higher-up points this out a bit later in the film, but it's too little, too late at that point. No matter how many cool fights, awesome mutants, or fabulous special effects can make up for such a mind-boggling backwards plot "twist."
I'm not saying I didn't enjoy the film. I'm just saying that I spent several minutues of it yelling at the screen from the audience. Literally. No one heard me. It was loud in there. In a way, I have to thank X-Men Origins: Wolverine for giving me some perspective with which to critique the following week's big blockbuster, Star Trek.
Now, I'm no Star Trek lover; in fact, in my younger years I was one of those Star Wars nerds who's so devoted a fan that she actually stands against the very idea of Star Trek. In college, however, I became close friends with Mary, who I credit with getting me excited about things like comic books and superheroes…and with bestowing upon me a working knowledge of Star Trek: The Next Generation. That said, one hardly needs more than a tenuous grasp on 20th century pop-culture to follow along with this film. After all, it's an origins story – OMG, another similarity to Wolverine! How did I miss that one? – and we're carefully, if quickly, introduced to all the heroes from the original Star Trek throughout the film. While they aren't all fresh out of Starfleet, they are all new to the Enterprise, rocketed into key roles by happenstance and quick thinking, and there's something truly exciting about that.
Come to think of it, what's not exciting about the new Star Trek? I expected some thrilling fight scenes and fast-paced chases. I expected crazy effects and fancy explosions. Check, check, check. super-check. For many, that kind of flash will be enough to brand Star Trek a successful endeavor. But how was I to imagine, based on the fast-paced, hype-tastic trailer pumped through the Web and on to television for the past year, that this film would actually have a carefully developed, extremely complex story? The folks behind Star Trek might have devoted as much care to character development as they did to their Enterprisesets and interstellar motion graphics. Furthermore, they managed to totally rewrite the future of the Star Trek universe; one friend of mine was appalled by this fact, but only one. Personally, I think it's a move of pure brilliance, one that could help this film become a sci-fi classic. And who could forget how super-hot all the main characters are? I, for one, can't stop thinking about it.
Both films obviously spent tons of time and money on development and details, but one of them just gave up when it came time for the script and the editing.  Not so fast, Hollywood; therein lies the difference between a frustrating Pre-Summer Blockbuster and an excellent one. Giving a crap about making your movie good, instead of just about your movie making money.

Here are some more details on my visit to the new Modern Wing of the Art Institute of Chicago, which opens this Saturday. Enjoy! As before, this was originally published on Gals' Guide.

OK, so the results are in. The Art Institute's new Modern Wing is GORGEOUS. In addition to being internally and externally beautiful (lots of suspension staircases, light and open air), the new wing allows for much more of the Art Institute's massive collection to be showcased at any one time. This true of the European Modern collection, housed on the third floor (this will be where many enter the wing when the big Renzo Piano ramp is opened on Saturday; the third-floor café will open then as well), but it's particularly big for the Contemporary Art (post 1960 stuff). I spoke with an Art Institute employee who informed me that AIC has the 3rd largest Contemporary collection in the world; the relatively tiny former Contemporary space could only display 2% of their collection at any one time! So while there are a few new pieces, much of the second-floor will feel new, as a lot of it was formerly under wraps for most of the year.
Anyway, I had a grand time – over 3 hours! – at the Preview, and was able to snap some photos. You can check it out for yourself starting this Saturday! 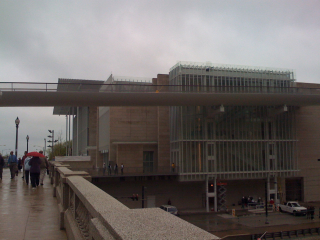 A view of the new north entrance from the west. 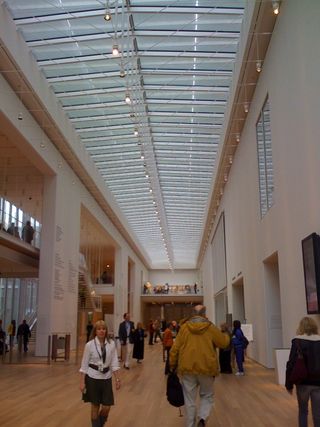 The lovely main lobby on the first floor, with a view to the second. 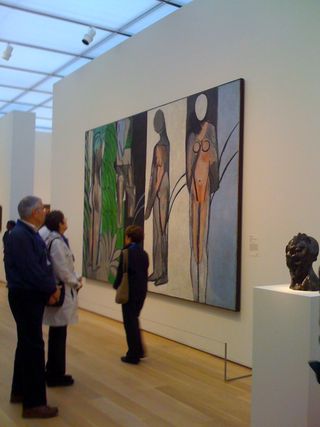 A large Matisse greets you on floor three; note how the entire ceiling lets light in from above!

The next three shots give you a sense of some of the architectural details. I know the shades are down and it's rainy, but the view to the north is really exquisite. 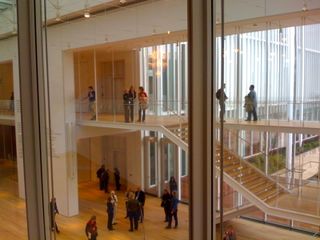 Hope you enjoyed these! Click on any of the images to enlarge, and don't forget to check this out yourself starting this Saturday.

Exciting news, ladies of Chicagoland who like art…this afternoon, I'm going to get a chance to see the new Modern Wing at the Art Institute! There's no flash photography allowed, but if I can manage to sneak a few shots with my phone I will certainly do so. I'm hoping we get to check out the new ramp that leads from Millennium Park into the new north entrance; word is that the addition of the wing means a bigger Modern Art collection for AIC, which I'm also thrilled for. Haters can stick to the south side of the museum. ;)