When I was a kid, I spent a LOT of time watching television. It wasn't a stay-inside-all-day, cartoon-binge thing, although I did enjoy a handful of Saturday morning cartoons (Ninja Turtles, Ghostbusters, and Garfield were my favorites). No, the majority of my TV watching happened between the hours of 7:00 and 9:00 p.m. And in the late 1980s and '90s, there was basically only one thing on TV between the hours of 7:00 and 9:00 p.m.: The 2-Hour Sitcom Block.

I could spent the rest of the evening recapping which shows were my favorite and trying to recreate a TV-Guide-style layout of what we were watching between say, 1987 and 1997. In fact, that idea sounds really tempting, as there are few things in life I love more that a good, old-fashioned sitcom. But instead, I'll just allow you to reminisce with me and a few pictures from some classics of the era. Click it to get a closer look. 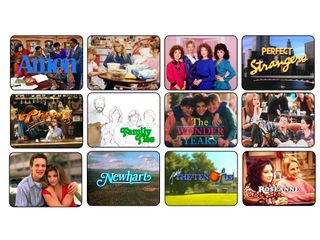 So what brought on all this Sitcom Block talk? Well, it's Monday night, and on Mondays, even in the year 2009, CBS has a fully-fledged sitcom block from 7:00 to 9:00 Central – no game shows, no CSI (at least until 9:00), no "reality," no hour-long dramedies. And it's pretty decent, if you like sitcoms. Tonight, I was actually able to stay home and watch it in its entirety: Big Bang Theory, How I Met Your Mother (my favorite), Two and a Half Men, and Rules of Engagement. It's likely not everyone's cup of television tea, but this sitcom lover wouldn't mind one bit if the 2-Hour Block had a bit of Renaissance. Who couldn't use some free, relatively mindless entertainment right about now?

The world is full of products that seem more like a joke than reality. Case in point: the Obama Chia Pet. But there's one product on the market right now that's both a joke andreality.

A recent episode of 30 Rock found Jack (Alec Baldwin) – who, as you may know, heads up Television and Microwave Programming at 30 Rock's fictional version of GE – desperately searching for a new name for his ground-breaking mini-microwave after the name "Bite Nuker" failed in European focus groups. In the episode, which originally aired on March 12th, Jack derails all progress on the week's TGS script, looking for new names for the device; strong candidates included "The Small Wonder" and "Port-a-Hottie," but Kenneth (Jack McBrayer) eventually suggested and Jack settled on the winning marketing moniker: "The Funcooker." This name is a go until Tracy (Tracy Morgan) uses the term to refer to his bared posterior on national television. Oops.
Fate of the fake Funcooker aside, I can't help but wonder what the folks at iCubed International think of the joke. While the company seems to have a slew of 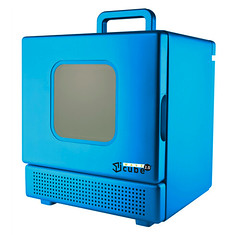 interesting products in the works, their current inventory involves just one primary item: a portable mini-microwave called the iWaveCube. The unbelievable device (I'm not entirely sure I do believe it!) comes in a host of fun colors and costs only $99; it's to be followed later this year by the iToastCube and the iFridgeCube. What's more, for $149 you can get one with a transformer that allows you to use it "in case of natural or man-made disaster." That model can be powered by your car.
That's right. You can microwave things in your CAR.
So, is this all just a hilarious coincidence, or are the 30 Rock writers paying homage to their favorite gadget? The jury's still out on that one; I'll have to do a bit more research and see what I can dig up. That said, if Season 4 of 30 Rock finds Jack pitching the Funfreezer or the Funburner, we'll know for sure where the inspiration came from.

I posted this on Cineplexus earlier today. Enjoy!

The newest episode of Reno 911 starts on Wednesday, April 1 at 10:30 P.M. Is it worth tuning in for another season of police ineptitude?

As episode one of Reno 911!'s sixth season begins, Lieutenant Dangle (Thomas Lennon) willfully ignores the most obvious change to the department: a personnel change. While quickly glossing over the fact that two deputies were burnt up in a (season five) taco stand fire, he deftly changes the subject to the arrival of new coffee mugs. But the change is noticeable, at least for the first few minutes of the show. Then the mayhem begins, and it becomes obvious that it's still shady business-as-usual in Reno.

Two new officers join the team with a world of experience. One, Lt. Jack Declan (Ian Roberts, Upright CItizens Brigade) is actually an expert, by-the-book lawman whose rigidness in the face of chaos is bound to make for some chuckle-worthy situations. The other, Deputy Frank Rizzo (Joe Lo Truglio, Pineapple Express, Superbad), comes to Reno with "a very long resume" and "not one letter of recommendation."

Notably missing are the dearly departed Clemmie (Wendy McLendon-Covey) and Kimball (Mary Birdsong), whose absence leaves the Reno Sheriff's Department a little low on estrogen, but thankfully the always outrageous Raineesha (Niecy Nash) and dorky comedy cornerstone Trudy (Kerri Kenney-Silver) are still around to keep the guys in check. They have their work cut out for them, especially since the team has been rounded out with two more gentlemen (I use the term loosely). Also gone is Deputy Garcia (Carlos Alazraqui), whose colorful worldview will be greatly missed. Or so you might think. I actually didn't notice he was gone until a blogcritics reader pointed it out to me. Oops.

I'm thrilled to that the show's producers have brought on another member of the cast of '90s sketch comedy show The State, which served as the proving ground for Lennon, Kenney-Silver, Robert Ben Garant (Junior), and co-creator Michael Patrick Jann. New guy Lo Truglio was a part of that cast, and is a very welcome addition to this cast as Deputy Rizzo.

As usual, a hilariously bad public service announcement falls at about the halfway point of each episode. And the comedy industry clearly hasn't lost any love for the series. Jonah Hill guest stars in episode one, as does Keegan Michael Key; Patton Oswalt and Jordan Peele guest star in episode two. Nick Swardson is back as the mind-boggling but hilarious Terry Bernadino, on roller skates as ever.

Considering the cast changes and long hiatus, the new season of Reno 911! does a remarkable job of keeping things the same as ever: the officers are still clueless, the townspeople are still crazy, and the screw-ups are still swept under the rug. And for this riotous mock-reality show, that means another season of original and very funny television.