« Snickers. It's a double entendre. In a non-sexual way. | Main | SunChips: A Dollar in a Mylar Bag »

What's Wrong With Revenge of the Nerds? A pointless list.

I posted this on my film review blog, Cineplexus, yesterday. Enjoy!


Because I am watching it on TV at the moment, for what is probably the fourth or fifth time, and because I love it dearly, despite its flaws, I present to you this Pointless List. There is no way it could possibly be comprehensive:

Problems with Revenge of the Nerds
1) All students at Adams seem to be about 30. 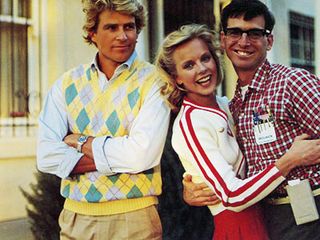 2) Despite being an institution suitable for valedictorians who wish to study computer science (in its early days), the football team and coach rule campus
3) The dean watches Alpha Betas throw students and possessions out the windows of the freshman dorm. No punitive action is taken.
4) Freshman paying for room and board are sent at a moment's notice to bunk in the gymnasium.
5) Two naked men (Louis and Gilbert) wear their glasses in the shower.
6) Gilbert is able to sketch a digital graphic of himself and a girl he just meant using only the keyboard. It's 1984. The graphic can dance.
7) A middle-aged woman is attracted to a 12-year-old boy on sight.
8) The police of the town in which Adams is located have no jurisdiction over what happens on campus.
9) The football team doesn't notice that their jock straps are wet from "liquid heat."
10) Poindexter totally sucks at playing the violin…until the big talent show.
11) Booger is not a nerd. A stoner? Yes. A dork? Maybe. Not a nerd.
I could go on, or I could make a list of the many, many things that are just so right about this movie. Like the soundtrack, which includes Talking Heads, "Daisy" in Japanese, and a choral rendition of "We Are the Champions." But I'll have to save that list for the next time I catch Revenge of the Nerds on TV. So…see you in 2011.